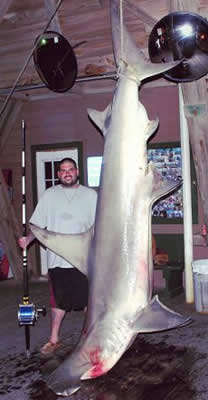 Dan Ficocello next to the 12-foot, 4-inch hammerhead shark he caught off the coast of Flagler Beach over the weekend. photo credit Dan Ficocello

DAYTONA BEACH, Florida -- For all the wrong reasons, sharks have been in the news lately in Florida. Over the past two weeks, several Florida swimmers, surfers, and a surfer's board have been bitten.

The lifeguards are waving a purple flag, indicating dangerous marine animals at the public beach. They warn people by driving up and down the shore, and after the bites, they call for people to get out of the water.

But it's a public beach, so they can't force anyone to stay out of the ocean, Gillin said.

The lifeguards are extra cautious, watching for fins in the waves. And after Labor Day passes, the beach-going population tends to thin out, Gillin said. Still, "like ants on a sugar cube," the storm-churned swells draw in the surfers, he said.

When shark angler Dan Ficocello heard about the incidents in Flagler Beach, he decided to try to catch one. And he did: a 12-foot, 4-inch great hammerhead, weighing 543 pounds, reeled onto shore around North 11th Street early Sunday morning.

The 28-year-old from Bunnell paddled his kayak about 250 yards offshore late Saturday night and dropped a barracuda head attached to his line. From shore, the angler felt a tug and the shark pulled his line out for about 15 minutes. Three and half hours later, Ficocello reeled in the animal, dead by the time it reached land.

About 10 people helped him load it onto a truck. They drove it to the Flagler Beach Pier and strung a rope over a beam, raising the shark and taking a picture.

When it comes to thoughts of jellyfish and stingrays, Ficocello would rather swim in a pool any day. But when asked if he has nightmares about a giant shark, Ficocello said, "Oh no man, I dream about them."