Research: Seamounts May Serve As Refuges For Deep-sea Animals That Struggle To Survive Elsewhere 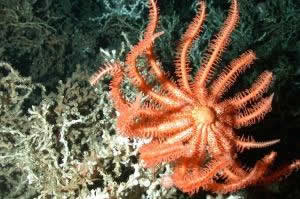 WASHINGTON, D.C. -- Largely unexplored deep-sea coral reefs, some perhaps hundreds of thousands of years old, off the coast of the southeastern U.S. are not only larger than expected but also home to commercially valuable fish populations and many newly discovered and unusual species. Results from a series of NOAA-funded expeditions to document these previously unstudied and diverse habitats and their associated marine life have revealed some surprising results.

Some of those findings and images of the reef habitats 60 to 100 miles off the North Carolina coast will be featured in a high-definition film, “Beneath the Blue”, to be shown for the first time in public May 17 at the North Carolina Museum of Natural Sciences in Raleigh, N.C. Research scientists, joined by museum staff, conducted a series of expeditions to the deep coral habitats on the continental slope off the east coast from North Carolina to central Florida, in an area known as the Blake Plateau.

“We discovered that a number of animals thought to be rare are common around the corals, documented many animals outside of their previously known ranges, and discovered species new to science,” NOAA zoologist Martha Nizinski said. “We also have had a firsthand look at how animals are using the habitat and interacting with each other. These discoveries relate to the fact that this has been a difficult habitat for scientists to sample because of the deep depths, rough topography and strong currents from the overlying Gulf Stream.”

For Nizinski, who has worked at NOAA Fisheries’ National Systematics Laboratory in Washington, DC since 1987 and served as co-principal investigator and invertebrate specialist on the annual expeditions between 2002 and 2005, the opportunity to explore these uncharted waters was one she could not pass up. She worked with a team of researchers from the University of North Carolina at Wilmington, the U.S. Geological Survey, the North Carolina Museum of Natural Sciences, and Harbor Branch Oceanographic Institution, which operates the research vessel Seward Johnson and manned submersible Johnson Sea Link used in the expeditions.

Nizinski says the coral habitats explored during the expeditions appear to be more extensive than previously believed and are important habitat for several species of commercially and recreationally important fish as well as sponges, crabs, brittle stars and other creatures. The corals also contain historical data about changing ocean climate and productivity, and are hotspots of biodiversity. Many organisms live in and around these deep coral habitats, including species new to science and species with pharmaceutical potential. She is still studying the biological and coral samples collected during the various expeditions, research that will take several more years to complete.

Prior to these expeditions to explore and document deep coral habitats off the coast of the southeastern U.S., little was known about the location or extent of these reefs, composed primarily of the deep coral species Lophelia pertusa, how they form, and what marine species are dependent upon them. Lophelia is the most common reef-building cold-water coral and is found throughout the world. It has been found as far north as Nova Scotia in the western North Atlantic Ocean colonizing seamounts and other hard surfaces, but does not form the extensive banks that are found off the North Carolina coast, where Lophelia reefs may be tens to hundreds of thousands of years old.

"Most people associate coral reef habitats with tropical islands and warm, shallow waters, so when you tell people that reef systems exist in the cold waters off the coast of North Carolina they are surprised,” Nizinski says. “These deep-water coral banks can grow to be 100 meters (about 330 feet) tall and kilometers (miles) long. It is not what people expect to find off North Carolina, probably the northernmost deep-water coral banks existing along the U.S. East Coast.”

Unlike the colorful corals found in shallow tropical waters, Lophelia lacks zooxanthellae, the symbiotic algae which live inside most tropical reef-building corals. Generally white in color, Lophelia is fragile and slow growing. It lives in water depths between 80 and 3,000 meters (roughly 260 to 9,850 feet), but is most commonly found between 200 and 1,000 meters (about 650 to 3,300 feet) depth, where there is no sunlight, and water temperatures range from about 4 to 12 Â°C (between 39 and 54Â°F).

Nizinski says the Lophelia deep-reef habitats may be more important to many western Atlantic species than previously believed. Yet despite being in deep water with strong currents, the reefs are potentially threatened by fishing, energy exploration, and other activities. The South Atlantic Fishery Management Council has proposed for protection, as Habitat Areas of Particular Concern (HAPCs), a large area which includes the deep-water coral habits off North Carolina.