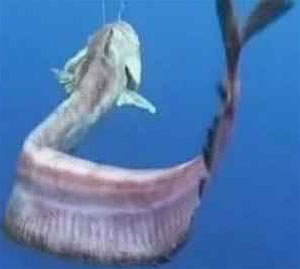 BAHIA, Brazi -- A large fish without scales that turned up floating off the coast of Brazil baffled scientists and specialists from the region who are studying the rare specimen and ensure that the species is totally unknown.

The fish, which draws attention due to its rarity, was found by a team of marine biologists in that country while doing research on sea turtles.

The fish, weighing 88 pounds, is six feet long, it has sharp teeth and the particularity of not having scales.

The specialists, who stationed the fish in formalin for further research, believe that the animal would not be edible due to the high content of fat in its body.

“It’s a rare gem, is a fish that humans had never seen,” said one researcher.

It is believed that these coastal areas of Brazil is also hosting other species unknown to the human eye.