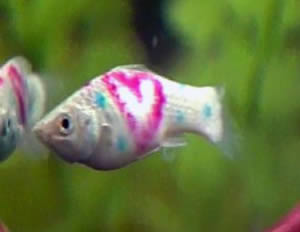 Tattooed fish were seized and euthanized in Oklahoma City

OKLAHOMA CITY, Oklahoma -- Oklahoma City police have seized tropical fish from a pet store because they were tattooed in violation of city law. Officers took the fish from Quality Pets and had them euthanized.

Store owner Donnie Fleming says police came to his store after someone complained about a fish he sold that had "I love you" tattooed on its skin.

Fleming says it's ironic the city promotes fishing in which a minnow has a hook stuck in it and used as bait but coloring a fish and putting it in an aquarium and feeding it is considered cruel.