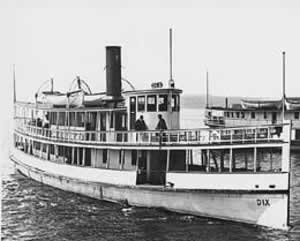 SEATTLE, Washington -- Using a five passenger submarine and a remotely operated vehicle, a team of local explorers has discovered a historic Mosquito Fleet Steamer in Elliott Bay near Alki Point. The team believes the shipwreck may be the final resting place of the SS Dix, which sank in 1906 and has not been seen since. After 104 years, the sinking of the Dix is still considered the worst maritime disaster in Puget Sound.

On November 18, 1906, the Dix was underway from Seattle to Port Blakely on Bainbridge Island with 77 passengers and crew when she struck the three-masted schooner Jeanie one mile west of Duwamish Head. The Dix sank within minutes with a loss of thirty-nine lives.

At the time of the collision, the Captain of the Dix was below decks, collecting fares and First Officer Charles Dennison was at the helm. Dennison failed to see the SS Jeanie, which had slowed to almost a full stop to allow the Dix to pass. Seconds before impact, Captain Philip Mason, aboard the Jeanie, blew his steam whistle and reversed his engines to prevent a collision. For unknown reasons, Dennison suddenly turned toward the Jeanie, and struck just below the bow of the much larger schooner.

The bowsprit of the Jeanie caught on the superstructure of the Dix and momentum heeled the small steamship over allowing water to pour into the hull. This flooding, in conjunction with the added thirty tons of ballast proved to be a deadly combination and the Dix sank quickly. The passengers on the upper decks were able to escape, but the thirty-nine passengers that were below decks went down with the ship and are possibly still entombed within the wreck.

Explorer Laura James has searched for the location of the Dix for two decades. In early March, 2011, believing she had located the Dix, but lacking the resources to explore those extreme depths, she began collaborating with wreck diving author Scott Boyd, and OceanGate, a local marine exploration company. Boyd and James first scanned the wreck using surface sonar from aboard Scott's boat, Dive Bum, to confirm that it was likely to be a notable shipwreck and not another sunken barge.

OceanGate then provided a remotely operated vehicle (ROV) with an experienced crew on Dive Bum and on March 19, 2010, the first video images of the wreck were recorded along with high-definition sonar. "The deep wreck is clearly a wood-hulled passenger steamer from the Mosquito Fleet era and is in a location consistent with the last sighting of the Dix," said James.

On April 14 and 15, OceanGate's five person submarine Antipodes made three dives totaling 11 man-hours on the newly discovered wreck, which sits at a depth of 500 feet, about one mile north of Alki Point. "The photos, video, personal observations and sonar images captured during the hours spent on the wreck are all consistent with the vessel being the Dix," said Boyd. The pilothouse and much of the upper deck cabin is still in place, as is the propeller. The wreck is laying on its starboard side, pointed towards Port Blakely almost directly below the intersecting plots of the courses of the Jeanie and Dix.

Additional submarine dives are planned to gather more information and images to document the wreck using the latest 3D sonar technology. "It's a rare privilege to dive in a submarine to a depth where very few people have been," said Joel Perry, OceanGate's VP of Expeditions. "To visit a wreck that might be such an important piece of local history that nobody has seen before is an awesome experience."

The steamship Dix was built in 1904 by Crawford and Reid in Tacoma; displacing 130 tons and 102.5 feet long. She was mistakenly built too narrow, only 20.5 feet wide, which made her very unstable and caused her to roll uncomfortably. During initial vessel testing, she was discovered to also be top heavy and thirty tons of ballast were added to help keep her upright. The Seattle and Alki Transportation Company then put the Dix to work shuttling up to 150 passengers between downtown Seattle and Alki.

OceanGate is an Everett based marine exploration company that owns and operates manned and unmanned submersibles. OceanGate's mission is to open the oceans to those inspired by deep-sea discovery and help advance humanity's understanding of the marine environment. OceanGate expeditions support the work of marine researchers, filmmakers, historians, and other organizations devoted to exploring and protecting the world's marine habitat and artifacts.

Underwater explorer Scott Boyd has been finding, diving and documenting hundreds of wrecks throughout the Pacific Northwest. Better known locally for his stunning underwater photography, the hunt for local wrecks proved so successful that Scott co-authored and published a book outlining the history and dive information for more than one hundred local wreck sites (Northwest Wreck Dives). When not out diving our local wrecks he can often be found exploring and photographing the spectacular underwater cave systems of Mexico's Yucatan Peninsula.

Underwater explorer and videographer Laura James made her first "wreck dive" on a snowy Sunday morning in December, 1990, and has been discovering and exploring shipwrecks ever since. In addition to producing commercial videography and consulting for diving industry clients, James donates her time and effort to groups such as People for Puget Sound, Voices of the Straits and the Pacific Marine Research's Marine Science Afloat program, where she teaches school children about Puget Sound marine ecology.

Photos of the wreck can be found at: http://www.boydski.com/diving/photos/wrecks/dix/