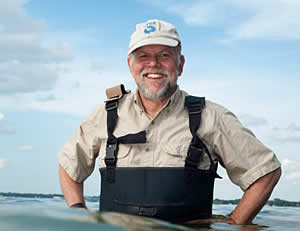 Stephen Carpenter is pictured in Lake Mendota near the campus shoreline on July 29, 2009. Photo: Jeff Miller

MADISON, Wisconsin -- Noted University of Wisconsin-Madison limnologist Stephen Carpenter has been awarded the 2011 Stockholm Water Prize, the world's most prestigious award for water-related activities, it was announced in Stockholm, Sweden today (Tuesday, March 22).

The award, which comes with $150,000 and a specially designed crystal sculpture, honors individuals and organizations "whose work contributes broadly to the conservation and protection of water resources and to improved health of the planet's inhabitants and ecosystems."

The award will be conferred in August by King Carl XVI Gustaf of Sweden in a royal award ceremony at Stockholm City Hall.

Carpenter, who directs the UW-Madison Center for Limnology, is a member of the U.S. National Academy of Sciences and a foreign member of the Royal Swedish Academy of Sciences. He is one of the world's most distinguished authorities on lakes and fresh water ecosystems, including eutrophication, long-term ecological change, lake food web dynamics, and the economic and social aspects of fresh water ecology.

He is a former president of the Ecological Society of America and his research, embodied in five books and nearly 300 scientific papers, is among the most cited in all of environmental science. He has received numerous awards and honors, including a Pew Fellowship in Conservation and Environment, the G. Evelyn Hutchinson Medal of the American Society of Limnology and Oceanography, and the Robert H. MacArthur Award from the Ecological Society of America.

"The prize increases my resolve and sense of obligation to work on emerging issues of fresh water, such as climate change and the connections of food and water security," says Carpenter.

The Stockholm water Prize was first presented in 1991. Past recipients include such luminaries as Rita Colwell, former director of the U.S National Science Foundation. The prize is presented each year in Stockholm during World Water Week. This year the prize will be conferred on Aug. 25.