Study: Manatees Are Touchy-Feely To The Extreme; 'We Needed To Put Their Senses To The Test'

Study: Manatees Reflect Quality Of Health In Marine Ecosystems; 'Canaries In The Mineshaft' 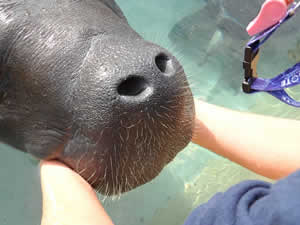 SARASOTA, Florida -- Manatees can feel water movements thousands of times smaller than the width of a human hair â an ability that makes them one of the most touch-sensitive mammals on Earth â according to a new study led by scientists at Mote Marine Laboratory.

The study, published recently in a special issue of the peer-reviewed Journal of Comparative Physiology A, is the first published research revealing how well manatees can feel water movement using their facial whiskers. Results show that manatees can detect tiny ripples better than any marine mammal studied to date, suggesting that touch may be vital to their survival in the wild.

The study tested the touch sensitivity of Mote's resident manatees, Buffett and Hugh â the most extensively trained manatees in the world. The manatees participate voluntarily in training sessions for husbandry (animal care) procedures along with research.

For more than 15 years, Mote research has focused on how manatees use their senses to perceive their ever-changing environment. Florida manatees (Trichechus manatus latirostris) are an endangered species facing threats such as habitat loss, severe cold stress during winter, harmful algal blooms, entanglement in marine debris and boat strikes. Understanding their senses can help reveal how manatees perceive and possibly avoid risks.

Mote studies have already shown that manatees' vision is poor, compounded by the turbid and tannic waters where they spend much of their lives, that manatees can hear a wide range of pitches despite loud background noise and can detect which direction sounds come from. Research at Mote has also revealed that manatees can feel textures as keenly or better than a human Braille reader by using their sensitive facial whiskers, known as vibrissae.

The new study aimed to reveal how well these facial vibrissae detect water movement â possibly one of the most important signals for navigating and avoiding nearby obstacles.

"We know that touch is important to manatees â their vibrissae are linked with many sensitive receptors and a large portion of their brain is dedicated to touch â but to really know how this translates to their behavior underwater, we needed to put their senses to the test," said Dr. Joseph Gaspard III, Mote's Manager of Animal Care, Training and Research.

Research took place at Mote's public outreach and informal science education facility, The Aquarium, where Buffett and Hugh can be viewed by the public daily and where they participate in morning research sessions behind the scenes. This unique research and training program was pioneered by scientists from Mote and New College.

"Through their extensive training, Hugh and Buffett are able to tell us how well they can sense water movement," Gaspard said. "We send out a signal which is essentially a 3D ripple, and then we ask them, 'Did you feel that?'"

During each research trial, a manatee positions its snout against a bar and waits. Then a scientific instrument nearby creates the ripple with a vibrating ball, or it stays still. When the manatees feel the water movement, they are trained to touch a yellow paddle, and when they feel no movement, they are to stay put. Each time a manatee responds correctly, it is rewarded with tasty apples, beets, carrots or monkey biscuits â all part of their structured healthy and balanced diet.

The manatees tried their whiskers at harder and harder tests, in which the vibrating ball generated less intense waves â causing less water movement â and made fewer movements per second â a lower frequency. By lowering the vibration in the water and documenting how often the manatees got the answer correct, the researchers found the manatees' threshold values â the lower limits of what their facial whiskers could detect.

When water rippled at 150 Hertz (times per second), Buffett and Hugh could feel water movement around and below one nanometer, respectively. For comparison, a human hair measures 80,000-100,000 nanometers wide. When the scientists lowered the ripple to 10 Hz, the manatees could detect water movements of 1,000 nanometers â still much smaller than a hair's width.

"The manatees had remarkable sensitivity," Gaspard said. "In touch research with marine mammals, the closest score we know of was from harbor seals, and the manatees blew them out of the water. They were more than 10 times more sensitive."

Manatees may use their super sense of touch to feel small changes in the relatively calm waters where they live and feed, to sense the "boundary layer" of water around obstacles and to feel which way currents are flowing â possibly an aid to migration, Gaspard said.

New research in progress is testing how Hugh and Buffett use the sensitive hairs along their bodies, not just their faces, to feel water movement. The researchers suspect that manatees might use touch to form a 3D map of their environment.

The researchers also suspect that touch helps manatees detect nearby objects, while hearing is useful over longer distances. They hope to apply this knowledge to study how manatees react to boats in the wild.

Said Gaspard: "Touch may not help them detect a distant watercraft, but if the boat is moving slowly enough, the water movement might just give the manatees a final burst of information that helps save their lives."