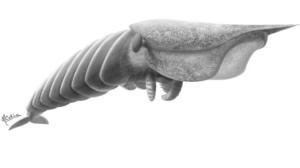 Reconstruction of Hurdia victoria, a formidable predator from the Cambrian era. (Marianne Collins/Science/AAAS)

UPPSALA, Sweden -- Hurdia victoria was originally described in 1912 as a crustacean-like animal. Now, researchers from Uppsala University and colleagues reveal it to be just one part of a complex and remarkable new animal that has an important story to tell about the origin of the largest group of living animals, the arthropods. The findings are being published in this week's issue of Science.

The fossil fragments puzzled together come from the famous 505 million year old Burgess Shale, a UNESCO World Heritage Site in British Columbia, Canada. Uppsala researchers Allison Daley and Graham Budd at the Department of Earth Sciences, together with colleagues in Canada and Britain, describe the convoluted history and unique body construction of the newly-reconstructed Hurdia victoria, which would have been a formidable predator in its time.

Although the first fragments were described nearly one hundred years ago, they were assumed to be part of a crustacean-like animal. It was not then realised that other parts of the animal were also in collections, but had been described independently as jellyfish, sea cucumbers and other arthropods. However, collecting expeditions from in the 1990s uncovered more complete specimens and hundreds of isolated pieces that led to the first hints that Hurdia was more than it seemed. The last piece of the puzzle was found when the best-preserved specimen turned up in the old collections at the Smithsonian National Museum of Natural History, Washington DC. This specimen was first classified as an arthropod in the 1970s and 80s, and then as an unusual specimen of the famous monster predator Anomalocaris.

The new description of Hurdia shows that it is indeed related to Anomalocaris. Like Anomalocaris, Hurdia had a segmented body with a head bearing a pair of spinous claws and a circular jaw structure with many teeth. But it differs from Anomalocaris by the possession of a huge three-part carapace that projects out from the front of the animal's head.

"This structure is unlike anything seen in other fossil or living arthropods," says Ph.D. student Allison Daley, who has been studying the fossils for three years as part of her doctoral thesis.

"The use of the large carapace extending from the front of its head is a mystery. In many animals, a shell or carapace is used to protect the soft-parts of the body, as you would see in a crab or lobster, but this structure in Hurdia is empty and does not cover or protect the rest of the body. We can only guess at what its function might have been."

Hurdia and Anomalocaris are both early offshoots of the evolutionary lineage that led to the arthropods, the large modern group that contains the insects, crustaceans, spiders, millipedes and centipedes. They reveal details of the origins of important features that define the modern arthropods such as their head structures and limbs. As well as its bizarre frontal carapace, Hurdia reveals exquisite details of the gills associated with the body, some of the best preserved in the fossil record.

"Most of the body is covered in the gills, which were probably necessary to provide oxygen to such a large, actively swimming animal," says Allison Daley.