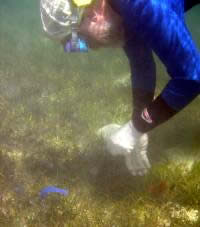 On the Great Barrier Reef in Australia, Fred Short, retrieves marked plants for an assessment

DURHAM, North Carolina -- Around the world, seagrass beds – shallow-water ecosystems that are important habitats, food sources, and sediment stabilizers – are in decline, says Frederick Short, research professor of natural resources and marine science at the University of New Hampshire. And as these underwater meadows disappear, so do commercially valuable shellfish and fish, waterfowl and other wildlife, water quality, and erosion prevention.

Short, who founded the global monitoring program SeagrassNet in 2001, has been studying eelgrass, a type of seagrass found in the Northern Atlantic, for more than 20 years. While he still conducts research at UNH's Jackson Estuarine Laboratory on the Great Bay Estuary in Durham, he also collaborates with teams of researchers to monitor seagrass health at 45 sites in 17 countries worldwide.

From the Hudson Bay, where the Cree Nation enlisted him to transplant their diminishing eelgrass beds, to the Pacific Island of Palau, Short's research has produced distressingly similar findings.

"Almost everywhere we start monitoring seagrass, it's declining," he says. And while conclusive global results are not yet available, Short is fairly certain the causes are consistent around the world: human impact.

At a state park in Malaysia, for instance, SeagrassNet has charted a decline since 2001 at both a "pristine" site and a less protected site. Satellite imaging showed researchers that the impact was not due to a global force like climate change, but rather to on-shore logging that had increased the level of water-borne sediments at both sites, decreasing light reaching the bottom, where seagrasses grow.

In remote areas of the Hudson and James Bays in sub-Arctic Canada, where members of the Cree Nation noticed their seagrass beds diminishing, Short noted that the beds were in the plume of fresh water released from a nearby Hydro-Quebec plant. The fresh water influx decreased the salinity so much that the seagrass could no longer survive.

Short and his SeagrassNet colleagues have not ruled out global climate change as a factor in the decline of seagrass beds. Yet so far, he's found the impacts on seagrass to be far more localized. "Human pollution of the water has been the biggest issue," he says.

Short likens seagrass beds to a forest on the ocean floor. Among the most productive plant communities on the planet, seagrass beds serve as protective nurseries for juvenile fish and shellfish, a habitat for many marine species, and a feeding ground for predatory fish, waterfowl and large sea creatures like manatees and sea turtles. The root and rhizome system of these flowering plants stabilizes sediments, protecting the coastline from currents and weather-related erosion. Seagrass is an effective filter of nutrients and particulates, and it is the basis of a detrital food chain that feeds fish and shellfish.

When seagrass beds disappear, Short says, the impact is major. A disease outbreak in the 1930s wiped out 90 percent of eelgrass in the North Atlantic. The scallop fishery in the mid-Atlantic disappeared, says Short, and "it's never really come back." In Thailand, where SeagrassNet researchers have begun investigating the impact of the 2004 tsunami on seagrass, the beds provide local fishers with significant shellfish. "If the seagrass beds disappear, so do the people's protein sources," says Short.

His work in Thailand highlights the reason for the worldwide monitoring program: Prior to SeagrassNet, little was known about seagrass in many locations around the world. With no baseline, assessing the impact of a disturbance like the tsunami is nearly impossible.

Short is looking forward, adding new sites to SeagrassNet around the world and, in New England, researching effective ways of restoring eelgrass to areas where water quality has improved. A site selection model he's developed helps him and other researchers determine areas that are optimal for restoring diminished eelgrass beds with sod-like patches.

As SeagrassNet researchers continue to input their data into a Web-accessible database, Short is now working on data analysis from the first five years of SeagrassNet monitoring. Meanwhile, he says, he will continue to add new sites to the global monitoring network. "It's growing just as fast as I can grow it," he says.