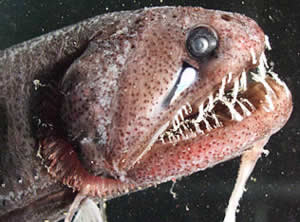 QUEENSLAND, Australia -- A University of Queensland researcher has returned from where no person has been before – deep in the western Pacific.

PhD student Adrian Flynn, from UQ's School of Biomedical Sciences, was part of an international team investigating never-before explored areas of the deep Pacific Ocean and he may have discovered a new species of fish in the process.

“We are in the process of confirming if a spookfish we collected on this trip is in fact a species new to science, which would be a most exciting discovery,” Mr Flynn said.

“Spookfishes are beautiful deep-sea fishes characterised by the presence of ‘tubular' eyes that see through its transparent head.”

Aboard the research vessel the Seward Johnson, Mr Flynn went fishing in depths up to 1500m and made some fascinating findings, including a live specimen of the pint-sized but fierce-looking anglerfish, a barrel-eye fish, with its tubular upward-looking eye, several species of dragonfishes and loosejaws.

Mr Flynn is using the data collected on this voyage as part of his study of mesopelagic fishes, which inhabit ocean depths between 100 and 1000m.

“I'm focusing on lanternfishes that are typically the most abundant mesopelagic fishes and they take part in daily vertical migration from deep waters into surface layers, believed to be the largest migration of animals on the planet,” he said.

“Lanternfishes possess light-emitting organs on the ventral surface of their bodies, which disturb their silhouette seen by predators looking up from below.

“In addition to this camouflage technique – known as counter-illumination – lanternfishes also possess headlamp-like photophores that point forwards, which are believed to be involved in species-recognition and other signalling behaviours.”

He said the other discovery which caused great excitement among his colleagues back on dry land in Brisbane was a whalefish.

“Whalefishes are rarely caught and their taxonomy is currently under review,” he said.

“My supervisor, Professor Justin Marshall, and his team are undertaking a study of the animal's unusual lateral line system, which are organs used for ‘distant touch', sensing water movement and hydrostatic disturbance.”

“The results from these voyages provide an exciting prelude to the Deep Ocean Australia expeditions planned for Australian waters later this year, where Australia's deep waters will be extensively explored for the first time,” Professor Marshall said.

“The Deep Ocean Australia team currently has two researchers aboard the second leg of the voyage of the Seward Johnson where, no doubt, there will be more intriguing discoveries made.”