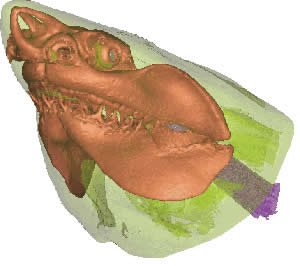 A 3-D image of a great white shark's jaw

There are still many mysteries surrounding what makes sharks such perfect predators, so Huber’s research on sharks’ “bite force” – their hunting performance – may offer new insights on sharks’ habits, capabilities and evolution. The research may also lead to advances in protective swimwear, shark-proofing equipment and a better understanding of flexible cartilage – which forms the sharks’ whole skeletons, much like human ears and noses.

“There’s a ton of bad data on how hard sharks bite,” Huber said. “And the more we learn the more we can understand these animals, educate the public, and keep people safer.”

Huber traveled to Australia in July to study an 8-foot great white shark that had become entangled in netting, and is now helping create a 3-D digital recreation of the shark that should reveal the animal’s biological mechanics. A CAT scan was taken of the shark’s skull and data from the dissection will be used to create the digital model. The digital model will include millions of bits of information, which together will allow a simulation of a great white’s bite at full force.

A shark’s hunting performance, Huber said, is not just based on its teeth, but on its muscles, behavior and streamlined body.

Huber, who is working with biologists at the University of New South Wales in Sydney, Australia and the University of Newcastle in Newcastle, Australia, is also studying similar characteristics on feeding performance in tiger and bull sharks, which, along with the great white, are responsible for most attacks on humans. Huber believes the great white probably will not wind up at the top of the list of bite force.

“The white has the narrowest head of the three, so it has less space for jaw muscles,” Huber said. “Consequently, we’re expecting that it will have a lower bite force on a pound-for-pound basis.”

But, Huber added that the great white – due to its excellent hunting abilities – doesn’t necessarily need to have the most powerful bite to take down prey.

“Much of the damage inflicted by white sharks is due to their teeth, and not necessarily to the force,” he said. Great white sharks have approximately 3,000 serrated teeth, and often shake whatever it bites into from side to side to initiate a sawing action.