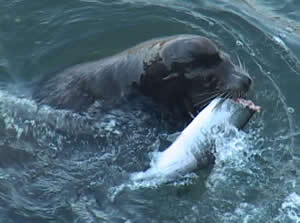 NOAA's Fisheries Service said today it was authorizing Idaho, Oregon and Washington to permanently remove the specific California sea lions eating the imperiled salmon and steelhead that congregate below Bonneville Dam as they head up the Columbia River to spawn. The authorization becomes effective on March 20 and stays in effect until the end of May 2016.

The agency has authorized the states to remove up to 92 animals annually, but estimates that far fewer, about 25 to 30, will be taken each year, given the conditions in the authorization.

Under the Marine Mammal Protection Act, states can request permission to kill individually identifiable California sea lions or seals that are having a "significant negative impact" on at-risk salmon and steelhead, and NOAA's Fisheries Service can grant that permission if certain legal standards are met.

State and federal biologists estimate that California sea lions have eaten between one-and-a-half and four percent of returning adult salmon at Bonneville Dam each year during the past eight years. This estimate is based on expert observations by federally trained biologists. Most of the fish eaten were spring Chinook or steelhead, and almost a third of the salmon and steelhead eaten by the sea lions are from stocks listed under the Endangered Species Act. Predation peaked in 2010, when about 6,000 adult salmon were eaten. Last year, about 3,600, or just over one and a half percent of the returning adult population, were eaten.

Under the authorization provided today, the states may euthanize individually identified California sea lions if no permanent holding facility, typically aquariums, for them can be found.

The agency's authorization responds to a request last summer from the three states to "lethally remove" predatory sea lions under a provision of the Marine Mammal Protection Act. Today's action will allow the states to target only individual sea lions that continue to eat salmon after deterrence methods have proven unsuccessful.

The current estimated West Coast population of California sea lions is almost 300,000, and biologists estimate that more than 9,000 animals could be removed from that population through human-caused actions such as ship strikes or entanglement in fishing nets without harming the species. In a typical year, about 430 California sea lions die from human-caused actions.

For the past several years, NOAA's Fisheries Service and other state, tribal and federal agencies have employed a wide range of deterrence methods, including using firecrackers and rubber buckshot, to discourage the sea lions from foraging at the dam. These efforts have been largely unsuccessful.