Research: Fish Facing Reflections Become Feisty But Fearful; 'It Seems Like Something They Don't Understand' 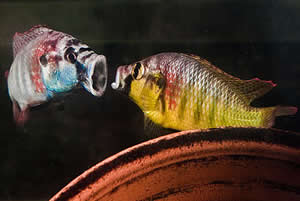 Two male cichlids spar with each other by showing what big mouths they have. credit Todd Anderson, Stanford

PALO ALTO, California -- Fish become feisty but fearful when facing themselves in a mirror, according to two Stanford biologists.

"It seems like something they don't understand," said Julie Desjardins, a postdoctoral researcher in biology and lead author of a paper describing the study, to be published in Biology Letters. The paper is available online now. "I think this stimulus is just so far outside their realm of experience that it results in this somewhat emotional response."

Desjardins and coauthor Russell Fernald, professor of biology, arrived at their conclusion by comparing the behavior and brain activity of male African cichlid fish during and after one-on-one encounters with either a mirror or other another male of about the same size.

The territorial male cichlids usually react to another male by fighting in a sort of tit-for-tat manner. Desjardins suspects the fish fighting their own reflections become fearful because their enemy in the mirror doesn't exhibit the usual reactions they would expect from another fish.

"In normal fights, they bite at each other, one after the other, and will do all kinds of movements and posturing, but it is always slightly off or even alternating in timing," Desjardins said. "But when you are fighting with a mirror, your opponent is perfectly in time. So the subject fish really is not seeing any sort of reciprocal response from their opponent."

The discovery that fish can discern a difference so subtle could prompt researchers to take a second look at how well other lower invertebrates can discriminate among various situations.

Desjardins and Fernald arranged 20-minute sparring sessions for their fish. A clear wall across the middle of the tank kept the combatants apart when two fish were pitted against each other, so there was never any actual fish-to-fish contact. The fish invariably tried to fight with their foe â real or reflected â and their behavior during the dust-ups appeared consistent whether they were mirror-boxing or not.

When the researchers performed post-mayhem postmortems on the fish, they found that the levels of testosterone and another hormone associated with aggression circulating in the cichlids' bloodstreams were comparable regardless of whether the foe was a reflection or flesh.

But in dissecting a part of the brain called the amygdala, they found evidence of substantially more activity in that region in the mirror-fighting fish than in those tussling with real foes.

"The amygdala is a part of the brain that has been associated with fear and fear conditioning, not only in fish but across all vertebrates," Desjardins said. The fish appeared to feel an element of fear when confronted by an opponent whose behavior was off-kilter.

Although higher vertebrates such as humans have very elaborate amygdalas by comparison with fish, there is still a part of the human amygdala that is analogous to the fish brain and performs similar functions.

"The fact that we saw evidence of a really high level of activity in the amygdala is pretty exciting," Desjardins said. "And surprising."

"I thought I might see a difference in the behavior and when I didn't see that, I was pretty skeptical that I would see anything different in the brain," she said.

But she thinks what they found is evidence of a negative emotional response and offered what she emphasized is a speculative comparison. Perhaps it is "like when you are a little kid and someone keeps repeating back to you what you have just said â that quickly becomes irritating and frustrating," she said. "If I was going to make that giant leap between humans and fish, it could be similar."

So what does this tell us about a fish's level of consciousness?

"It's difficult to say," she said. "But I think it certainly indicates that there is more going on cognitively than people have long assumed in most lower invertebrates."

Desjardins said many researchers who study the cognitive capabilities of lower vertebrates such as frogs, lizards and birds look at behavior and hormones, but rarely look at the brain.

"I think there is a lot that could be done with these types of techniques that has not been done in the past," she said. "This opens the door for us to better understand what is going on in the brain of non-mammalian animals."

The National Science Foundation provided funding for this research.