Scientists: Hearing Loss May Be Responsible For Whale Beachings 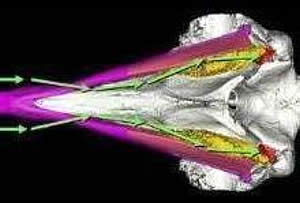 ARLINGTON, Virginia -- Rocket science is opening new doors to understanding how sounds associated with Navy sonar might affect the hearing of a marine mammal – or if they hear it at all.

The same type of large industrial sized X-ray scanners that NASA uses to detect flaws in the space shuttle’s behemoth solid fuel rockets is now allowing scientists to peek inside the giant head of a whale. The scans are providing detailed three-dimensional replicas of a whale’s hearing anatomy using a breakthrough method developed by Dr. Ted Cranford, a marine biologist sponsored by the Office of Naval Research (ONR) and the Chief of Naval Operations Environmental Readiness Division (N45).

Using a simulated model of a male beaked whale’s head, Cranford’s team at San Diego State University and the University of California at San Diego (UCSD) has unveiled data that suggests mid-frequency active sonar sounds are largely filtered, or "muffled," before reaching the animal’s ears. The findings also suggest that higher frequencies used by whales to hunt prey are heard at amplified levels without any dampening.

"Even though these findings are promising, our next step is to reproduce the study with a similar species for which hearing tests are available, such as the bottlenose dolphin," Cranford said. "If we obtain like results, it will help to validate this new discovery."

The innovative approach integrates advanced computing, outsized X-ray CT scanners, and modern computational methods (developed by Dr. Petr Krysl at UCSD) to generate the reproductions in minute detail. The simulation, also referred to as a "finite element model" or FEM, accurately describes the interactions of sound with the whale's hearing anatomy. In addition, it forecasts and analyzes incoming sound received at the ear and provides a description of how different characteristics combine to create movement throughout the ear.

"The simulation technology is powerful because it provides a means to look at a broad range of species, from whales to fish, for which we may not otherwise be able to study hearing," said ONR program manager Dr. Michael Weise. "Virtual experiments can also provide potential for evaluating and directing mitigation efforts."

In October, Cranford earned top honors for a presentation titled "Knocking on the Inner Ear in Cuvier's Beaked Whale" at the 18th Biennial Biology of Marine Mammals Conference in Quebec, Canada. The development is gaining widespread attention throughout the scientific community as a credible and highly useful tool.

In 2009, ONR and N45 contributed $20 million for research on marine mammals and the effects of underwater sound. ONR provides the science and technology necessary to maintain the Navy and Marine CorpsÂ´ technological advantage. Through its affiliates, ONR is a leader in science and technology with engagement in 50 states, 70 countries, 1,035 institutions of higher learning, and 914 industry partners. ONR employs approximately 1,400 people, comprising uniformed, civilian and contract personnel. N45 works with the fleets, systems commands, and government regulatory agencies to develop effective environmental policy and ensure Sailors and Marines can train and operate in compliance with environmental laws.