Researchers: Dolphin 'Conching' May Be Spreading To Others 'Before Our Very Eyes' 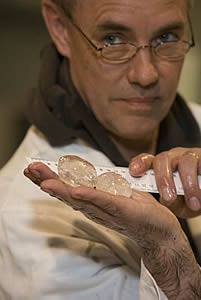 Giant and colossal squid have eyes with diameters measuring two or three times that of any other animal. Credit: Nilsson

LUND, Scania -- It's no surprise that giant and colossal squid are big, but it's their eyes that are the real standouts when it comes to size, with diameters measuring two or three times that of any other animal. Now, researchers reporting online on March 15 in Current Biology, a Cell Press publication, have used complex computations to explain those massive peepers. Giant squids' 10-inch eyes allow them to see very large and hungry sperm whales from a distance in the pitch darkness of their deep-sea home.

According to the researchers' calculations, animals living underwater would have no use for such large eyes if the goal were to see an average object, such as prey smaller than themselves. That's why even the eyes of large whales aren't much more than 3.5 inches across.

"For seeing in dim light, a large eye is better than a small eye, simply because it picks up more light," said Dan-Eric Nilsson of Lund University. "But for animals that live in the sea or in lakes, the optical properties of water will severely restrict how far away things can be seen.

"Through complex computations we have found that for animals living in water, it does not pay to make eyes much bigger than an orange. Making eyes larger than that will only marginally improve vision, but eyes are expensive to build and maintain."

For Nilsson's team, that begged the question of why giant squid bother with their giant eyes. Using a mathematical model of underwater vision, they tested the benefits of very large eyes for a broad range of tasks under various light conditions. Those efforts showed that very large eyes aren't much better than smaller ones unless one wants to see something that is itself very big, like a whale.

Giant squid may also be unique in that they are powerful enough to escape a sperm whale once they've spotted one, Nilsson says. But how can giant squid see a sperm whale at depths beyond daylight's reach?

"The answer is bioluminescenceâlight produced by small gelatinous animals when they are disturbed by the whale moving through the water," Nilsson says. "It is well known that bioluminescence can reveal submarines at night, and diving sperm whales will become visible for the same reason."

The findings may also explain the large eyes of prehistoric ichthyosaurs, giant marine reptiles that looked something like dolphins, the researchers say. Although ichthyosaurs lived long before whales came along, they would have had to contend with giant predatory pliosaurs.

The new model can also be used to predict how far other animals can see underwater. "It is a powerful tool for understanding vision," Nilsson says.