Bite-Sized Popcorn Fish: Popping With Excitement; 'People Of All Ages Will Enjoy This Fun Taste'

Is This The Perfect Prawn? 'Beautifully Textured Meat, Rich Color, Robust Size And A Great Taste' 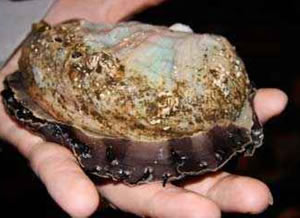 A cultured red abalone fed a diet of brown and red seaweed. Note the colored bands on its shell. Photo: Christina S. Johnson

SAN DIEGO, California -- If you are looking for ways to improve farmed red abalone growth rates, their shell color, or even taste, you may want to consider supplementing the animals’ diet with some red algae.

Mike Graham, a seaweed ecologist at Moss Landing Marine Laboratories in Central California, reports that red abalone, the largest of California’s eight native species, grow up to 25 percent faster when fed a mix of 5 percent red algae and 95 percent giant kelp, as compared to animals raised on an all kelp (brown seaweed) diet.

The higher growth rate is based on a 54-week study of 23,000 abalone between the ages of two and three at the Monterey Abalone Company, a sea-based, grow-out facility in Monterey Harbor that raises about 230,000 abalone in submerged wire cages hung beneath the wharf. Growth rates were measured every few weeks, following the industry standard of sorting animals by shell diameter.

In addition to making abalone bigger, the red algae also resulted in more vibrant, deeply saturated shell color, which in some live-in-the-shell markets translates into a price premium, according to the facility.

Perhaps more significantly, a group of restaurateurs, food critics and marine biologists invited to a recent red abalone tasting at the swank Highlands Inn in Carmel preferred “super abs” nearly 4-to-1 over red abalone fed a diet of giant kelp. Texture was cited as the main reason for the preference.

Graham says the results of the taste test and enhanced growth rates are pretty straightforward upshots of making the marine snails’ cultured diet closer to what it would be in nature. The gastropods, in nature, are grazers that feed on drifting pieces of all kinds macroalgae.

“Diet drives the way animals taste and the way they look,” said Graham, whose study was funded by NOAA’s California Sea Grant.

“Red algae is like feeding your kids vitamins,” said Thew Suskiewicz, a graduate student in Graham’s laboratory, who helped with the feeding study and the development of a prototype seaweed garden in the harbor.

Because of the study, the abalone company now supplements the diet of its abalone “seed” (90,000, 1-year-old animals) with 5 percent red algae. Some of the red seaweed is cultured on ropes in the harbor; some is gathered from local beach wrack.

“Our goal is to raise them on red algae for at least three years and to see how the study results really translate into production time,” said Art Seavey, co-owner of the Monterey Abalone Company. On a diet of giant kelp, red abalone reach a harvestable size of about 3.5-inches after three-to-four years of grow-out time. “It would be amazing to reduce this by a year.”

Red algae or gracilariopsis, as it is known in scientific circles, is native to the Pacific and commercially cultured for human consumption as “ogo” at places such as the Carlsbad Aquafarm in San Diego County. The farm also grows green abalone, which is tolerant to Southern California’s warmer temperatures, and feeds their abalone a diet of nearly 100 percent red algae.

“We would absolutely like to expand our seaweed culture,” said Trevor Fay, co-owner of the Monterey Abalone Company. “Ideally, we would set up thousands of lines over an area the size of a football field just outside the harbor.”

“There are a lot of desired opportunities with seaweed culture,” Fay said. “It can lessen our reliance on cutting live kelp, which historically has been a hot topic, especially locally on the Monterey Peninsula. Another desired result, especially with regard to the red algae, is enhancing flavor and growth. We also love having a product that looks like what it is named after. We hope that a varied diet will also boost the animals’ immune system, which kicks into high gear during El Nino.”

Another key motivator for cultivating seaweed is ensuring a steady supply of abalone food in winter. “It is always in the back of our minds,” Suskiewicz said. “What are we going to feed them in winter?’“

Winter is associated with food shortages because of the punishing storms that tear apart kelp beds, making harvesting dangerous or impossible. Kelp growth also slows during the short days of winter.

“Seaweed culture is an exciting thing for California,” said H. Roy Gordon, president of Fishtech, Inc. in Bodega Bay, an abalone consulting company currently advising new farms in Italy, Chile and China. “It will be nice to take a boat a couple hundred yards instead of miles to get kelp.”

Restricted access to kelp beds is another issue limiting the supply of abalone feed, as the state of California in 2007 began enforcing limits and bans on extractive activities (such as kelp cutting and fishing) in about 18 percent of state waters between Santa Barbara and Santa Cruz counties.

California has 13 abalone farms that generate sales of $5 million to $10 million annually, Gordon said. While some land-based farms have the option of feeding their crop manufactured food, this is not an option for operations like the Monterey farm, as the pellets would escape from the cages or dissolve before being eaten.

One idea for securing year-round access to food for abalone is to develop techniques for storing the abundant supply of spring and summer kelp, in addition to growing it.

This, though, has proven difficult for those who have tried so far. “We tried drying and storing seaweed, and we didn’t have much luck,” said Ray Fields, manager of The Abalone Farm in Cayucos, the largest abalone grower in the state. “The problem is the lack of sunshine in Central California. We had to take the seaweed far inland to dry it.

There are mold issues near the coast. It has to be stored in airtight containers, and if the moisture content is not right, it crumbles and goes down the drain.”

As part of the ongoing Sea Grant project, Moss Landing Marine Laboratories ecologist Graham soon will begin exploring whether seaweeds can be silaged, as is done with grains for livestock. He thinks that the fermenting process, if it can be done, may improve the availability of protein to abalone.

“Silage is an interesting idea because you don’t have to dry it out all the way,” Fields said.

“We are really looking forward to finding a viable method of preservation that will help us in wintertime,” Seavey added.