Researcher: Small Sea Creatures May Be The 'canaries In The Coal Mine' Of Climate Change

Study: Fertilizer Use Damaging Both Water Quality And Aquatic Life 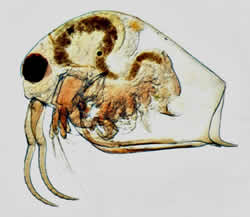 This male water flea of Bosmina genus debuted in a UB lab.

BUFFALO, New York -- Male water fleas that scientists have never seen have made their debut in a University at Buffalo laboratory, providing biologists with their first glimpse of these elusive organisms.

The UB research, published last month in Proceedings of the Royal Society: Biological Sciences, opens a new window on the biological diversity of several species of water fleas, including those in the genus Daphnia and the genus Bosmina, that play major roles in freshwater food webs.

It also demonstrates that pesticides that mimic the hormone used in the UB experiments may have much broader effects than initially believed, and could damage populations of fish and other organisms higher up in the food chain.

"Most freshwater fish eat water fleas at some point in their lives," said Derek J. Taylor, Ph.D., associate professor of biological sciences in UB's College of Arts and Sciences and co-author on the paper. "They are an important food source for fish."

Water fleas are nearly microscopic organisms with transparent bodies. Found in lakes, ponds and other bodies of fresh water, they are crustaceans like lobsters and not insects, as their name suggests.

In stable environments, female water fleas generally reproduce asexually, essentially cloning themselves and resulting in populations of females that are practically impossible to tell apart.

Water flea populations grow much faster when they reproduce asexually than when they do so sexually, Taylor explained.

He added that the practice of rarely producing males has likely been conserved for 100 million years or more in a large group of freshwater crustaceans.

In the UB experiments, four distantly related species of water fleas were exposed to methyl farnesoate (MF), a crustacean juvenile hormone that is known to determine sex in some species that regularly produce males.

"Because the same MF hormone affects a broad range of crustaceans, any insecticide that mimics MF also may affect a large number of species in freshwater communities," said Taylor.

"In other words, MF-based insecticides are not insect-specific, and if you affect a non-target species that's a major player in these freshwater food webs, then it will affect things higher up the food chain," he said.

The increased production of males after exposure to these insecticides could reduce water flea populations significantly, adversely affecting freshwater fish populations, he said.

The induction of males in the lab comes at an important time, Taylor explained, since the Daphnia genome is expected to be published next year. Taylor is a member of the consortium based at Indiana University that is working on the genome.

"Breeding studies with both males and females often are necessary to identify candidate genes responsible for certain genetic traits," Taylor said. "If we want to understand, for example, the genetic basis for why some clones of Daphnia from lakes are more resistant to pollution, then having males could help to find the genes in the genome."

Male water fleas, Taylor explained, are assigned more readily to a species than are females, but males are only rarely produced and for many species, have never been seen.

"We need to know the species identities in order to understand how freshwater communities are changing over time, as a response to climate change, pollution or invasive species," said Taylor. "We're hoping that by studying the biology of the rare males, we can learn more about species diversity and freshwater ecosystem changes."

The male-inducing tool now will be used to understand water flea species diversity on a global scale.

Co-authors on the paper are Keonho Kim, doctoral candidate in the UB Department of Biological Sciences, and Alexey A. Kotov, Ph.D., scientist at the A. N. Severtsov Institute of Ecology and Evolution, Russian Academy of Sciences in Moscow.

The research was supported by a grant from the National Science Foundation, "Partnership for Enhancing Expertise in Taxonomy."

The University at Buffalo is a premier research-intensive public university, the largest and most comprehensive campus in the State University of New York.