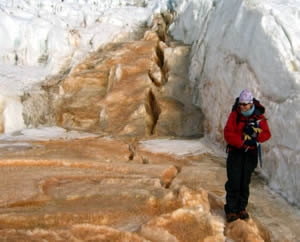 Mikucki on the job in Antarctica (courtesy of Jill Mikucki)

CAMBRIDGE, Massachusetts -- A reservoir of briny liquid buried deep beneath an Antarctic glacier supports hardy microbes that have lived in isolation for millions of years, researchers report this week in the journal Science.

The discovery of life in a place where cold, darkness, and lack of oxygen would previously have led scientists to believe nothing could survive comes from a team led by researchers at Harvard University and Dartmouth College. Their work was funded by the National Science Foundation, NASA, and Harvard's Microbial Sciences Initiative.

Despite their profound isolation, the microbes are remarkably similar to species found in modern marine environments, suggesting that the organisms now under the glacier are the remnants of a larger population that once occupied an open fjord or sea.

"It's a bit like finding a forest that nobody has seen for 1.5 million years," says Ann Pearson, Thomas D. Cabot Associate Professor of Earth and Planetary Sciences in Harvard's Faculty of Arts and Sciences. "Intriguingly, the species living there are similar to contemporary organisms, and yet quite different -- a result, no doubt, of having lived in such an inhospitable environment for so long."

"This briny pond is a unique sort of time capsule from a period in Earth's history," says lead author Jill Mikucki, now a research associate in the Department of Earth Sciences at Dartmouth and visiting fellow at Dartmouth's Dickey Center for International Understanding and its Institute of Arctic Studies. "I don't know of any other environment quite like this on Earth."

Chemical analysis of effluent from the inaccessible subglacial pool suggests that its inhabitants have eked out a living by breathing iron leached from bedrock with the help of a sulfur catalyst. Lacking any light to support photosynthesis, the microbes have presumably survived by feeding on the organic matter trapped with them when the massive Taylor Glacier sealed off their habitat an estimated 1.5 to 2 million years ago.

Mikucki, Pearson, and colleagues based their analysis on samples taken at Antarctica's Blood Falls, a frozen waterfall-like feature at the edge of the Taylor Glacier whose striking red appearance first drew early explorers' attention in 1911. Those "Heroic Age" adventurers speculated that red algae might have been responsible for the bright color, but scientists later confirmed that the coloration was due to rust, which the new research shows was likely liberated from subglacial bedrock by microorganisms.

Because water flows unpredictably from below the glacier at Blood Falls, it took Mikucki a number of years to obtain the samples needed to conduct an analysis. Finally, in the right place at the right time, she was able to capture some of the subglacial brine as it flowed out of a crack in the glacial wall, obtaining a sample of an extremely salty, cold, and clear liquid for analysis.

"When I started running the chemical analysis on it, there was no oxygen," she says. "That was when this got really interesting. It was a real 'Eureka!' moment."

The fluid is rich in sulfur, a geochemical signature of marine environments, reinforcing suspicions that the ancestors of the microbes now beneath the Taylor Glacier probably lived in an ocean long ago. When sea level fell more than 1.5 million years ago, they hypothesize, a pool of seawater was likely trapped and eventually capped by the advancing glacier.

The exact size of the subglacial pool remains a mystery, but it is thought to rest under 400 meters of ice some four kilometers from its tiny outlet at Blood Falls.

Mikucki's analysis showed that the sulfur below the glacier had been uniquely reworked by microbes and provides insight into how these organisms have been able to survive in isolation for so long.

The research answers some questions while raising others about the persistence of life in such extreme environments. Life below the Taylor Glacier may help address questions about "Snowball Earth," the period of geological time when large ice sheets covered Earth's surface. But it could also be a rich laboratory for studying life in other hostile environments, and perhaps even on Mars and its ice-covered moon, Europa.