Scientists: North Atlantic Slows On The Uptake Of CO2; 'A Tremendous Surprise' 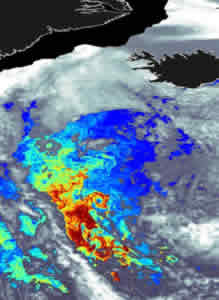 SEATTLE, Washington -- On a recent expedition to the inhospitable North Atlantic Ocean, scientists at the University of Washington and collaborators studying the annual growth of tiny plants were stumped to discover that the plankton had started growing before the sun had a chance to offer the light they need for their growth spurt.

For decades, scientists have known that springtime brings the longer days and calmer seas that force phytoplankton near the surface, where they get the sunlight they need to flourish.

But in research results published this week in the journal Science, scientists report evidence of another trigger.

Eric D'Asaro and Craig Lee, oceanographers in the UW's Applied Physics Laboratory and School of Oceanography, are among the researchers who found that whirlpools, or eddies, that swirl across the North Atlantic sustain phytoplankton in the ocean's shallower waters, where the plankton can get plenty of sunlight to fuel their growth even before the longer days of spring start.

The eddies form when heavier, colder water from the north slips under the lighter, warmer water from the south. The researchers found that the eddies cause the bloom to happen around three weeks earlier than it would if it was spurred just by spring's longer days.

"That timing makes a significant difference if you think about the animals that eat the phytoplankton," said D'Asaro, the corresponding author on the paper.

Many small sea animals spend the winter dozing in the deep ocean, emerging in the spring and summer to feed on the phytoplankton.

"If they get the timing wrong, they'll starve," Lee said. Since fish eat the animals, a reduction in their number could harm the fish population.

Scientists believe that climate change may affect oceanic circulation patterns such as the one that causes the eddies. They've found some evidence that warm waters from the subtropics are penetrating further to the north, Lee said.

"If the climate alters the circulation patterns, it might alter the timing of the bloom, which could impact which animals grow and which die out," he said.

Learning about the circulation of the ocean also helps scientists forecast changes in the ocean, a bit like meteorologists are able to forecast the weather, said D'Asaro.

The scientists didn't set out to look at the kind of large-scale mixing that they found. In April 2008, Lee and co-author Mary Jane Perry of the University of Maine arrived in a storm-lashed North Atlantic aboard an Icelandic research vessel.

They launched robots (specially designed by Lee and D'Asaro) in the rough seas. A float that hovered below the water's surface followed the motion of the ocean, moving around "like a giant phytoplankton," said D'Asaro.

Lurking alongside the float were 6-foot-long, teardrop-shaped Seagliders, also designed at the UW, that dove to depths of up to 1,000 meters, or 3,280 feet. After each dive, working in areas 20 to 50 kilometers, or 12 to 31 miles, around the float, the gliders rose to the surface, pointed their antennas skyward and transmitted their stored data back to shore via satellite.

The float and gliders measured the temperature, salinity and speed of the water, and gathered information about the chemistry and biology of the bloom itself. Soon after measurements from the float and gliders started coming in, the scientists saw that the bloom had started, even though conditions still looked winter-like.

"It was apparent that some new mechanism, other than surface warming, was behind the bloom's initiation," said D'Asaro.

To find out what, the researchers needed sophisticated computer modeling.

She generated eddies in a model using the north-to-south oceanic temperature variation. Without eddies, the bloom happened several weeks later and didn't have the space and time structures actually observed in the North Atlantic.

In the future, the scientists hope to put the North Atlantic bloom into a broader context. They believe much can be learned by following the phytoplankton's evolution across an entire year, especially with gliders and floats outfitted with new sensors. The sensors would look at the tiny animals that graze on the phytoplankton.

"What we're learning about eddies is that they're a critical part of life in the ocean," said Perry. "They shape ocean ecosystems in countless ways."