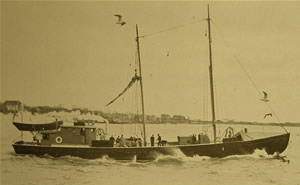 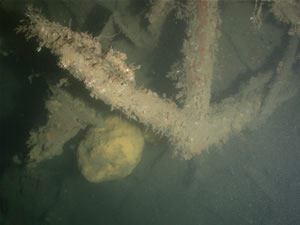 An anchor sits at the Joffres bow among scattered debris. credit NOAA/SBNMS and NURC-UConn

Built by an Essex, Mass., shipbuilder, the Joffre was launched as a schooner in 1918. The vessel fished with tub trawls (baited hooks) until 1939, when it was converted into a motorized eastern rig dragger, a type of trawler. The Joffre caught fire and sank on Aug. 10, 1947, off Gloucester, Mass., following a ten-day fishing trip to Nova Scotia’s offshore banks. The fire quickly engulfed the vessel, forcing its ten-man crew to abandoned ship. During its 29 years of service, Joffre’s crew landed over 15 million pounds of fish.

“Joffre’s conversion from a hook-fishing schooner to diesel-powered trawler reflected changes in the fishing industry, both at sea and onshore, that dramatically changed America’s relationship to seafood,” said Stellwagen Bank sanctuary superintendent Craig MacDonald. “The shipwreck is a physical link to New England’s rich maritime heritage.”

Scientists from NOAA and the National Undersea Research Center at the University of Connecticut documented the shipwreck site in 2006 with a remotely operated vehicle. The fieldwork recorded the vessel’s features, including portions of its wooden hull, large diesel engine and propulsion machinery, and trawl winch. The information will allow the sanctuary to interpret the site as a tangible connection to New England’s fishing heritage and connection to the sea.

NOAA and NURC-UConn scientists have located and documented more than a dozen historic shipwrecks in the sanctuary using side scan sonar, remotely operated vehicles, and autonomous underwater vehicles. The Joffre is the sanctuary’s fourth shipwreck site to be included on the National Register, administered by the U. S. Department of the Interior’s National Park Service.

The Joffre’s location within Stellwagen Bank National Marine Sanctuary provides protection unavailable in other federal waters off Massachusetts. Sanctuary regulations prohibit moving, removing, or injuring, or any attempt to move, any sanctuary historical resource, including artifacts and pieces from shipwrecks. Anyone violating this regulation is subject to civil penalties.

Stellwagen Bank National Marine Sanctuary encompasses 842 square miles of ocean, stretching between Cape Ann and Cape Cod offshore of Massachusetts. Renowned for its scenic beauty and remarkable productivity, the sanctuary is famous as a whale watching destination and supports a rich assortment of marine life, including marine mammals, seabirds, fishes and marine invertebrates. The sanctuary’s position astride the historic shipping routes and fishing grounds for Massachusetts’ oldest ports also make it a repository for shipwrecks representing several hundred years of maritime transportation.