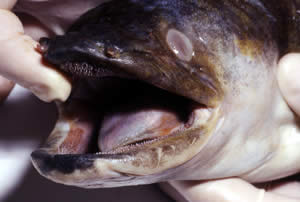 A slippery water predator known to travel hundreds of metres over land to find water has been blamed for the disappearing wildlife at the Eagle Vale pond.

A freshwater eel is believed responsible for the disappearance of water fowl, small ducks and possibly birds at the pond near the Eagle Vale Leisure Centre.

The Macarthur Chronicle last week revealed the mysterious decline in bird numbers at the pond, with residents fearing people were stealing the fowls and ducks.

An Eagle Vale resident, who did not want to be named, said he believed eels were responsible for the missing birds.

He said he had seen an eel snatch a bird from the water's surface.

"It's not the people around the pond responsible for the decline in wildlife, it's what's under the water that is the problem," the resident said. "I was there and I saw an eel take an animal.

"At the time I phoned the council and told them what I saw and they said they'd look into it," he said.

According to the Wet Tropics Management Authority, freshwater eels are often found in "the most unexpected place" and are capable of moving over moist ground to get to other waters.

Australian Museum fishery spokesman Mark McGrouther said it was possible that an eel had moved into the pond.

He said there were two varieties of freshwater eels, long-finned and short-finned and both behaved in a similar manner.

He said landlocked long-finned eels those that could not return to sea because of physical barriers could grow up to 3m in length and weigh 22kg.

Mr McGrouther said eels sometimes ate fish and young birds in the ponds of Sydney Botanic Gardens and often after the ponds were cleaned out, the eels returned.

"I have done some work in another area of Sydney clearing out ponds of eels and they were eating smaller water animals and ducks," he said. "Eels have also been known to climb walls and cross railway tracks to get into Warragamba Dam."