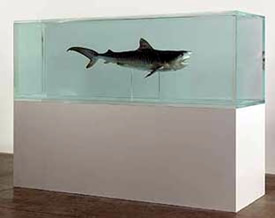 Bought for $4m: Hirst’s The Wrath of God

SEOUL, South Korea -- The Samsung Museum in Seoul has bought Damien Hirst’s The Wrath of God (2005), a new version of the artist’s shark suspended in formaldehyde, for $4m from the Galeria Hilario Galguera in Mexico City. The Korean corporate museum has also bought The Inescapable Truth, a white dove suspended as if in flight above a human skull, for $3m.

Hirst’s first shark in a tank, The Physical Impossibility of Death in the Mind of Someone Living was commissioned by Charles Saatchi in 1991 for Â£50,000. In 2004, the British collector sold it to US hedge fund manager, Steve Cohen, for $12m, making it the most expensive work by a living artist ever sold, with the exception of early work by Jasper Johns.

When the Samsung Museum puts its Hirst sculptures on display, the British artist will be exceptionally well represented in Korean museums. The businessman and collector C.I. Kim who runs a chain of department stores in Cheonan is also a keen Hirst collector. The artist’s monumental sculptures Hymn and Charity are on public display in his Arario Gallery. Meanwhile, Tate in London owns very few works by Damien Hirst.