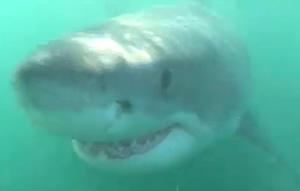 In the first census of its kind, research led by UC Davis and Stanford University found that there are far fewer white sharks off central California than biologists had thought.

The study, published today in the journal Biology Letters, is the first rigorous scientific estimate of white shark numbers in the northeast Pacific Ocean. It is also the best estimate among the world's three known white shark populations (the others are in Australia/New Zealand and South Africa).

The researchers went out into the Pacific Ocean in small boats to places where white sharks congregate. They lured the sharks into photo range using a seal-shaped decoy on a fishing line. From 321 photographs of the uniquely jagged edges of white sharks' dorsal fins, they identified 131 individual sharks.

From these data they used statistical methods to estimate that there are 219 adult and sub-adult white sharks in the region. (White sharks are classed as sub-adults when they reach about 8-9 feet in length and their dietary focus shifts from eating fish to mostly marine mammals. They are adults when they reach sexual maturity — for males, that is about 13 feet long; for females, it is about 15 feet.)

"This low number was a real surprise," said UC Davis doctoral student Taylor Chapple, the study's lead author. "It's lower than we expected, and also substantially smaller than populations of other large marine predators, such as killer whales and polar bears. However, this estimate only represents a single point in time; further research will tell us if this number represents a healthy, viable population, or one critically in danger of collapse, or something in between."

"We've found that these white sharks return to the same regions of the coast year after year," said study co-author Barbara Block, a Stanford University marine biologist and a leading expert on sharks, tunas and billfishes. "It is this fact that makes it possible to estimate their numbers. Our goal is to keep track of our ocean predators."

Satellite tagging studies have demonstrated that white sharks in the northeast Pacific make annual migrations from coastal areas in Central California and Guadalupe Island, Mexico, out to the Hawaiian Islands or to the "White Shark Café," a region of the open ocean between the Baja Peninsula and Hawaii where white sharks have been found to congregate — and then they return to the coastal areas.

In addition to Block and Chapple (who is now a postdoctoral researcher at the Max Planck Institute in Germany), the study's co-authors are Loo Botsford, professor, and Peter Klimley, adjunct associate professor, both of the UC Davis Department of Wildlife, Fish and Conservation Biology; postdoctoral researcher Salvador Jorgensen of Stanford University (who is now a research scientist with the Monterey Bay Aquarium); researcher Scot Anderson of Point Reyes National Seashore; and graduate student Paul Kanive of Montana State University in Bozeman.