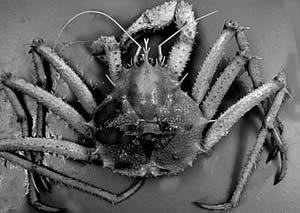 The image shows Lithodes galapagensis, the only king crab species yet recorded from the seas around the Galapagos Islands. Credit: NOCS

Sally Hall, a PhD student at the University of Southampton's School of Ocean and Earth Science (SOES) at the National Oceanography Centre, Southampton (NOCS) has formally described four new species of king crab, all from the deep sea.

Hall discovered the new species in the Smithsonian Collections of the National Museum of Natural History in Washington. Explaining the significance of the find, she said: "King crabs include some of the largest crustaceans currently inhabiting Earth and are fished by humans, particularly from the shallower waters of the polar regions. The new discoveries increase the total number of king crab species known to 113."

The new species are Paralomis nivosa from the Philippines, P. makarovi from the Bering Sea, P. alcockiana from South Carolina, and Lithodes galapagensis from the Galapagos archipelago – the first and only king crab species yet recorded from the seas around the Galapagos Islands. P. nivosa and P. makarovi came from previously unidentified samples collected in the early part of the twentieth century by the US Bureau of Fisheries steamer, Albatross.

King crabs were first formally described in 1819. They are now known from subtidal waters at high latitudes, but deep-sea species occur in most of the world's oceans, typically living at depths between 500 and 1500 metres.

"We are only now beginning to understand the incredible diversity of animals living in the deep sea," said Hall: "It is incredible that the Albatross collection is still yielding new information, even though it is over 100 years since this survey of deep-sea life began."

It is now clear that species of deep-sea king crab live in most areas of the world's oceans, but many more species remain to be discovered. "The oceans off eastern Africa, the Indian Ocean and the Southern Ocean are all particularly poorly sampled," said Hall: "We need to know which king crab species live where before we can fully understand their ecology and evolutionary success."