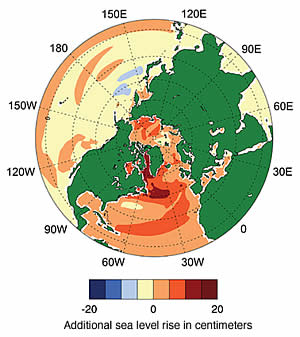 BOULDER, Colorado -- Melting of the Greenland ice sheet this century may drive more water than previously thought toward the already threatened coastlines of New York, Boston, Halifax, and other cities in the northeastern United States and in Canada, according to new research led by the National Center for Atmospheric Research (NCAR).

The study, which will be published Friday in Geophysical Research Letters, finds that if Greenland's ice melts at moderate to high rates, ocean circulation by 2100 may shift and cause sea levels off the northeast coast of North America to rise by about 12 to 20 inches (about 30 to 50 centimeters) more than in other coastal areas. The research builds on recent reports that have found that sea level rise associated with global warming could adversely affect North America, and its findings suggest that the situation is more threatening than previously believed.

"If the Greenland melt continues to accelerate, we could see significant impacts this century on the northeast U.S. coast from the resulting sea level rise," says NCAR scientist Aixue Hu, the lead author. "Major northeastern cities are directly in the path of the greatest rise."

A study in Nature Geoscience in March warned that warmer water temperatures could shift ocean currents in a way that would raise sea levels off the Northeast by about 8 inches (20 cm) more than the average global sea level rise. But it did not include the additional impact of Greenland's ice, which at moderate to high melt rates would further accelerate changes in ocean circulation and drive an additional 4 to 12 inches (about 10 to 30 cm) of water toward heavily populated areas in northeastern North America on top of average global sea level rise. More remote areas in extreme northeastern Canada and Greenland could see even higher sea level rise.

Scientists have been cautious about estimating average sea level rise this century in part because of complex processes within ice sheets. The 2007 assessment of the Intergovernmental Panel on Climate Change projected that sea levels worldwide could rise by an average of 7 to 23 inches (18 to 59 cm) this century, but many researchers believe the rise will be greater because of dynamic factors in ice sheets that appear to have accelerated the melting rate in recent years.

The new research was funded by the U.S. Department of Energy and by NCAR's sponsor, the National Science Foundation. It was conducted by scientists at NCAR, the University of Colorado at Boulder, and Florida State University.

To assess the impact of Greenland ice melt on ocean circulation, Hu and his coauthors used the Community Climate System Model, an NCAR-based computer model that simulates global climate. They considered three scenarios: the melt rate continuing to increase by 7 percent per year, as has been the case in recent years, or the melt rate slowing down to an increase of either 1 or 3 percent per year.

If Greenland's melt rate slows down to a 3 percent annual increase, the study team's computer simulations indicate that the runoff from its ice sheet could alter ocean circulation in a way that would direct about a foot of water toward the northeast coast of North America by 2100. This would be on top of the average global sea level rise expected as a result of global warming. Although the study team did not try to estimate that mean global sea level rise, their simulations indicated that melt from Greenland alone under the 3 percent scenario could raise worldwide sea levels by an average of 21 inches (54 cm).

If the annual increase in the melt rate dropped to 1 percent, the runoff would not raise northeastern sea levels by more than the 8 inches (20 cm) found in the earlier study in Nature Geoscience. But if the melt rate continued at its present 7 percent increase per year through 2050 and then leveled off, the study suggests that the northeast coast could see as much as 20 inches (50 cm) of sea level rise above a global average that could be several feet. However, Hu cautioned that other modeling studies have indicated that the 7 percent scenario is unlikely.

In addition to sea level rise, Hu and his co-authors found that if the Greenland melt rate were to defy expectations and continue its 7 percent increase, this would drain enough fresh water into the North Atlantic to weaken the oceanic circulation that pumps warm water to the Arctic. Ironically, this weakening of the meridional overturning circulation would help the Arctic avoid some of the impacts of global warming and lead to at least the temporary recovery of Arctic sea ice by the end of the century.

The northeast coast of North America is especially vulnerable to the effects of Greenland ice melt because of the way the meridional overturning circulation acts like a conveyer belt transporting water through the Atlantic Ocean. The circulation carries warm Atlantic water from the tropics to the north, where it cools and descends to create a dense layer of cold water. As a result, sea level is currently about 28 inches (71 cm) lower in the North Atlantic than the North Pacific, which lacks such a dense layer.

If the melting of the Greenland Ice Sheet were to increase by 3 percent or 7 percent yearly, the additional fresh water could partially disrupt the northward conveyor belt. This would reduce the accumulation of deep, dense water. Instead, the deep water would be slightly warmer, expanding and elevating the surface across portions of the North Atlantic.

Unlike water in a bathtub, water in the oceans does not spread out evenly. Sea level can vary by several feet from one region to another, depending on such factors as ocean circulation and the extent to which water at lower depths is compressed.

"The oceans will not rise uniformly as the world warms," says NCAR scientist Gerald Meehl, a co-author of the paper. "Ocean dynamics will push water in certain directions, so some locations will experience sea level rise that is larger than the global average."