Giant Catfish Dies Trying To Eat Football; 'I've Never Seen Anything Like This In 30 Years'

Tasmania: Last Whale Dies After West Coast Mass Stranding; 'We Did Everything Possible' 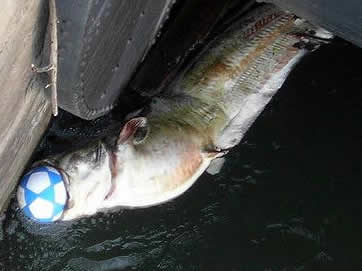 A police handout photo showing the catfish found in a sluice near the southern city of WÃ¼rzburg.

BERLIN, Germany -- A catfish met an unpleasant fate in Germany when it tried to eat a football floating in the river. Police patrolling the Main River say it's the weirdest case they've seen in 30 years.

A giant catfish died trying to eat a soccer ball and was found floating in a river with the ball wedged in its large snout, police in Germany said.

The two-meter long fish was found on Monday in a sluice in the Main River with its teeth sunk into the blue and white plastic ball.

"The catfish had evidently bitten into the ball and suffocated," Bavarian police said in a statement. "Whether the fish was swept up in the current excitement about football in the wake of the EURO 2008 championship could not be ascertained."

Reiner JÃ¼nger of the river police said: "I've never seen anything like this in 30 years on the job." He said catfish are among the biggest freshwater predators. They lie in wait on the river bed and attack prey on the surface. They sometimes even attack ducks swimming past.