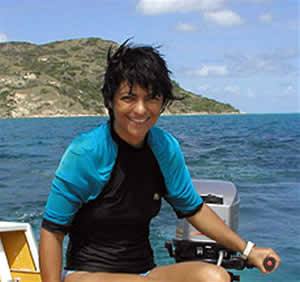 Dr. Grutter has examined the relationship between parasite-eating fish and their host

QUEENSLAND, Australia -- UQ research has confirmed teamwork is key to any good relationship, even those between parasite-eating fish.

Dr Alexandra (Lexa) Grutter, from UQ's School of Integrative Biology, along with colleagues from Stockholm University and The University of Neuchatel, Switzerland, found cleaner fish worked more effectively in pairs, provided they didn't take advantage of their client.

“By being in a pair, and cooperating as a pair, you end up providing a better service to your client,” Dr Grutter said.

“It's not just because there are two of you – the cumulative benefits are higher than if they provided the service separately.”

A cleaner fish's main role is to remove the parasites from its client fishes, a mutually beneficial behaviour.

This system works well when cleaner fish cooperate, but they prefer to cheat by eating the client's mucus, causing it to quickly swim away.

All cleaners can choose to work individually, but only the largest female in the harem has the option of teaming up with the male to inspect larger clients.

“We had previously found that clients chose stations with pairs of cleaner fish, so we wanted to find out why.”

When either fish ate the prawn, the plate of food was quickly removed, simulating the client fish swimming off.

“We've done a lot of experiments using this sort of approach – the cleaner fish love prawn but they don't like fish flakes,” Dr Grutter said.

“The plate would be removed when someone cheated, and the male would then chase the female, and chasing is a form of punishment because it's a costly behaviour.

“Males were more likely to chase females in trials in which the female had eaten the prawn item.

“So we can say that females were more likely to cooperate, possibly to avoid punishment.

“When working individually, however, the males and females provided a similar cleaning service.”