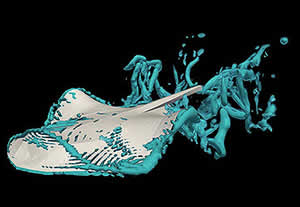 BUFFALO, New York -- Stingrays swim through water with such ease that researchers from the University at Buffalo and Harvard University are studying how their movements could be used to design more agile and fuel-efficient unmanned underwater vehicles.

The vehicles could allow researchers to more efficiently study the mostly unexplored ocean depths, and they could also serve during clean up or rescue efforts.

"Most fish wag their tails to swim. A stingray's swimming is much more unique, like a flag in the wind," says Richard Bottom, a UB mechanical engineering graduate student participating in the research.

Bottom and Iman Borazjani, UB assistant professor of mechanical and aerospace engineering, set out to investigate the form-function relationship of the stingray â why it looks the way it does and what it gets from moving the way it does.

They will explain their findings at the 66th Annual Meeting of the American Physical Society Division of Fluid Dynamics. Their lecture, "Biofluids: Locomotion III â Flying," is at 4:45 p.m. on Sunday, Nov. 24, in Pittsburgh, Pa.

The researchers used computational fluid dynamics, which employs algorithms to solve problems that involve fluid flows, to map the flow of water and the vortices around live stingrays.

The study is believed to be the first time the leading-edge vortex, the vortex at the front of an object in motion, has been studied in underwater locomotion, says Borazjani. The leading-edge vortex has been observed in the flight of birds and insects, and is one of the most important thrust enhancement mechanics in insect flight.

The vortices on the waves of the stingrays' bodies cause favorable pressure fields â low pressure on the front and high pressure on the back â which push the ray forward. Because movement through air and water are similar, understanding vortices are critical.

"By looking at nature, we can learn from it and come up with new designs for cars, planes and submarines," says Borazjani. "But we're not just mimicking nature. We want to understand the underlying physics for future use in engineering or central designs."

Studies have already proven that stingray motion closely resembles the most optimal swimming gait, says Bottom. Much of this is due to the stingray's unique flat and round shape, which allows them to easily glide through water.

Borazjani and Bottom plan to continue their research and study the differences in movement among several types of rays.