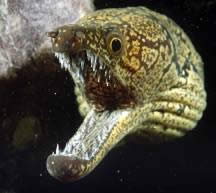 Previously, over four tons of moray eels were required to isolate ciguatoxin

SENDAI, Japan -- The synthesis of a little understood toxin found in tropical fish marks an important step in natural product synthesis, report Japanese chemists. The work will not only help to tackle a widespread food-borne illness – it will also spare tonnes of Moray eels from a grisly end.

Ciguatoxin is produced by algae that form the diet of many fish in the Pacific and Indian Oceans, and causes so-called ciguatera poisoning in people who eat those fish. Symptoms include gastrointestinal, cardiovascular and neurological disorders that can last for weeks or even years. Luckily it is rarely fatal, but poisoning is expected to become more widespread as an increasingly exotic selection of fish makes it onto fishmongers’ stalls worldwide.

Studies of ciguatoxin have been hampered by the 'minute' concentrations found in fish flesh, say Maayuki Inoue and colleagues at Tohoku University, Sendai. When its structure was first resolved, also by researchers at Tohoku, a whopping four tonnes of moray eels had to be sacrificed in order to extract just 0.35mg of the toxin.

Even tiny quantities of the compound are extremely dangerous, and tests in mice have shown that it is almost 300 times as toxic as the tetrodotoxin, the infamous compound found in pufferfish. Understandably, a means to synthesise ciguatoxin has been much in demand.

There are more than 20 related ciguatoxins that share similar chemical structures, and one of the less toxic, called CTX3C, was synthesised five years ago. Inoui and colleagues have now synthesised the two most toxic members of the family: ciguatoxin itself and 51-hydroxyCTX3C.

Ciguatoxins are huge ladder-like molecules that have 13 interconnected rings of atoms. In order to build each molecule in the correct configuration, the scientists had to develop a new method to form one of the central rings in the ladder. This involved a radical cyclisation, a reaction that generates a highly reactive unpaired electron which then knits the ring together.

The scientists found that this ring-closure was guided in the right direction by adding a pentafluorophenyl group to a nearby part of the molecule, a tactic that could prove fruitful in other natural product syntheses, they say.

Now that Moray eels need no longer fear the blender, the team hope that strategies to control ciguatera food poisoning should follow soon.