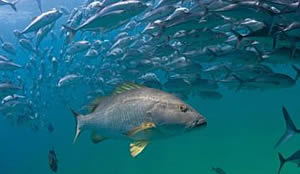 SAN DIEGO, California -- A thriving undersea wildlife park tucked away near the southern tip of Mexico's Baja peninsula has proven to be the world's most robust marine reserve in the world, according to a new study led by researchers at Scripps Institution of Oceanography at UC San Diego.

Results of a 10-year analysis of Cabo Pulmo National Park (CPNP), published in the Public Library of Science (PLoS) ONE journal, revealed that the total amount of fish in the reserve ecosystem (the "biomass") boomed more than 460 percent from 1999 to 2009. Citizens living around Cabo Pulmo, previously depleted by fishing, established the park in 1995 and have strictly enforced its "no take" restrictions.

"We could have never dreamt of such an extraordinary recovery of marine life at Cabo Pulmo," said National Geographic Explorer-in-Residence Enric Sala, who started the study in 1999. "In 1999 there were only medium-sized fishes, but ten years later it's full of large parrotfish, groupers, snappers and even sharks."

The most striking result of the paper, the authors say, is that fish communities at a depleted site can recover up to a level comparable to remote, pristine sites that have never been fished by humans.

"The study's results are surprising in several ways," said Octavio Aburto-Oropeza, a Scripps postdoctoral researcher, World Wildlife Fund Kathryn Fuller fellow and lead author of the study. "A biomass increase of 463 percent in a reserve as large as Cabo Pulmo (71 square kilometers) represents tons of new fish produced every year. No other marine reserve in the world has shown such a fish recovery."

The paper notes that factors such as the protection of spawning areas for large predators have been key to the reserve's robustness. Most importantly, local enforcement, led by the determined action of a few families, has been a major factor in the park's success. Boat captains, dive masters and other locals work to enforce the park's regulations and share surveillance, fauna protection and ocean cleanliness efforts.

"We believe that the success of CPNP is greatly due to local leadership, effective self-enforcement by local stakeholders, and the general support of the broader community," the authors note in their report.

Strictly enforced marine reserves have been proven to help reduce local poverty and increase economic benefits, the researchers say. Cabo Pulmo's marine life recovery has spawned eco-tourism businesses, including coral reef diving and kayaking, making it a model for areas depleted by fishing in the Gulf of California and elsewhere.

"The reefs are full of hard corals and sea fans, creating an amazing habitat for lobsters, octopuses, rays and small fish," said Brad Erisman, a Scripps postdoctoral researcher and co-author of the article. "During some seasons thousands of mobula rays congregate inside the park and swim above the reef in a magnificent way."

The scientists have been combining efforts to monitor the Gulf of California's rocky reefs every year for more than a decade, sampling more than 30 islands and peninsula locations along Baja California, stretching from Puerto Refugio on the northern tip of Angel de la Guarda to Cabo San Lucas and Cabo Pulmo south of the Bahia de La Paz.

"I participated, back in the 1990s, in the studies for the declaration of the marine park. Frankly, we decided to go ahead because the community was so determined but the place at that time was not in good environmental health," said Exequiel Ezcurra, Director of the University of California Institute for Mexico and the United States (UC MEXUS) and co-author of the article. "If you visit the place now, you cannot believe the change that has taken place. And all of it has occurred thanks to the determination of a community of coastal villagers that decided to take care of their place and to be at the helm of their own destiny."

"Few policymakers around the world are aware that fish size and abundance can increase inside marine reserves to extraordinary levels within a decade after protection is established; fewer still know that these increases often translate into economic benefits for coastal communities" said Aburto-Oropeza. "Therefore, showing what's happened in Cabo Pulmo will contribute to ongoing conservation efforts in the marine environment and recovery of local coastal economies."