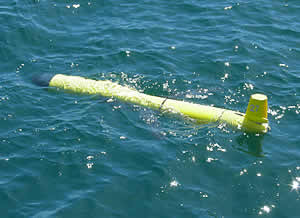 SILVER SPRING, Maryland -- The first underwater robotic vehicle â or "glider" â to cross an ocean will be the centerpiece of a new exhibit opening in the Sant Ocean Hall at the Smithsonian National Museum of Natural History on Dec. 9. The U.S. Integrated Ocean Observing System (IOOSÂ®) glider, operated by Rutgers University, carried out the trans-Atlantic journey last year, just months before the technology was used to help in the Deepwater Horizon BP response.

Rutgers scientists and students launched the trans-Atlantic glider, dubbed "the Scarlet Knight" in honor of the school's mascot, off the New Jersey coast in spring of last year. They and their Spanish colleagues from Puertos Del Estado (the Spanish Port Authority) recovered the glider off the Spanish coast after seven months at sea and brought it ashore in the small town of Baiona where Christopher Columbus' ship, the Pinta, landed with news of the New World more than 500 years ago. The glider reached Baiona on Dec. 9, 2009 â one year to the day of the exhibit being launched within the Smithsonian's Sant Ocean Hall.

"Gliders sample the ocean in places it is impractical to send people and at a fraction of the cost," said Zdenka Willis, director of the U.S. IOOS Program. "Using robots to collect scientific data is the wave of the future in terms of ocean observing."

Gliders collect data such as temperature, salinity, currents and density that describe conditions below the surface of the sea and at varying depths.

As part of the Deepwater Horizon BP oil spill response effort, IOOS partners deployed a fleet of gliders equipped with sensors to help indicate the presence of oil. Although scientists must still confirm the oil through water sampling, the gliders narrowed the search zone for subsurface oil.

"New technologies give us greater insight into how the ocean works. The trans-Atlantic glider, in particular, helped reduce uncertainty in some of our climate models," said Richard L. McCormick, Rutgers University president. "We are thrilled to work with IOOS to enhance this understanding at such a critical time for our planet."

"The Office of Naval Research is proud to join in celebrating this accomplishment," said Rear Adm. Nevin P. Carr Jr., chief of Naval Research. "We are always excited to see Navy basic research investments, such as this one in autonomous ocean sensing, pay off for the Navy and the ocean science community. These vehicles provide critical knowledge for naval operations as well as data that will assist in achieving a better understanding of the complex global marine environment."

IOOS is a federal, regional and private-sector partnership working to enhance our ability to collect, deliver and use ocean information. IOOS delivers the data and information needed to increase understanding of our oceans and coasts, so decision-makers can act to improve safety, enhance the economy and protect the environment.