Probing Question: What Is A Red Tide? 'You Have To Be Careful And Know Where Things Come From'

Probing Question: Why Do Whales Beach Themselves? 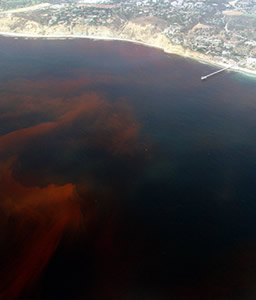 UNIVERSITY PARK, Pennsylvania -- Although its name sounds like a low-budget horror movie, you won't find "Red Tide" at a theater near you. To take in this natural phenomenon, you'll have to venture to the ocean, because red tide — or more scientifically, HAB or harmful algae bloom — occurs when a harmful variety of algae reproduces so densely that the water appears red, yellowish-brown or green from the high concentrations of photosynthetic pigments.

Explained Michael Arthur, a Penn State geosciences professor with research expertise in marine ecosystems, most varieties of algae are harmless and occupy an essential tier of the food chain.

The algae responsible for red tide, however, is one of a few dozen species of phytoplankton called dinoflagellates that, under the right conditions, produce toxins. The level of toxicity depends on the specific algal variety involved, with the most dangerous species emitting potent neurotoxin that can kill marine and coastal wildlife, and can even cause illness or death in humans.

But why do these blooms occur?

According to Arthur, "Blooms can't occur unless the algae is already present in the water, and the right nutrients are present — particularly nitrogen and phosphorus — to supply the raw materials that stimulate rapid growth of the algae population."

Aided by warm water and stagnant surface conditions, nutrients play a large part in allowing the algae to reproduce so quickly. Arthur said one source of these nutrients comes from upwelling, a process where colder, deeper ocean water is brought up to shallower water, bringing nutrients with it. Upwelling along the U.S. West Coast may have a lot to do with the high incidence of blooms in that region. The bluish-green glow, or bioluminescence, of the relatively harmless dinoflagellate species Noctiluca scintillans, is a common sight in California's waters.

However, Karenia brevis — the microorganism responsible for most red tides in Florida's Gulf of Mexico — is a much redder and more dangerous strain. A 2005 outbreak along Florida's southwest coast was described in The New York Times as one of the state's "worst red tides in decades." At its peak, it caused a 2,000 mile-wide "dead zone" off the city of St. Petersburg that was responsible for "more than 950 tons of dead creatures" that washed up on area beaches. Ironically, hurricanes typically bring relief by diluting the concentration of algae, but even Hurricane Katrina didn't end Florida's 2005 ferocious outbreak.

Areas where pollution drains into the ocean often experience algae blooms, Arthur noted. He suspects excess nutrification is the cause. "Blooms have been observed around aquaculture sites and fish farms where nutrients are being shed into the surrounding water," he said. "Fertilizer run-off from farmland and sewage waste also add to the nutrient content, supplying the algae with a more abundant food source."

According to the National Oceanic and Atmospheric Association (NOAA), over 50 percent of unusual marine mammal mortality events are due to harmful algae blooms. While shellfish such as clams, mussels and oysters are not directly harmed by red tide, their filter-feeding systems store the algae's toxins in their tissue. If tainted shellfish is ingested, they can have a deadly affect.

As Arthur explained, "Paralytic Shellfish Poisoning (PSP) and other syndromes caused when people eat tainted shellfish can cause catastrophic damage to victims' cardiovascular, digestive and/or neurological systems. Some, including PSP, are potentially fatal. If you contract this condition," he continued, "the first symptom you'll likely notice is a numbness on your tongue. If this occurs, you should get medical help immediately. Breathing machines have saved lives in this situation. Otherwise, the heart keeps beating but the paralyzed lungs fail, leading to death."

Reported occurrences of PSP in coastal areas have increased in the last 30 to 40 years. Arthur said it's possible that the condition is simply more widely recognized today and therefore more accurately reported. There also are more people living in coastal areas, as well as better monitoring systems to locate PSP-carrying algae. However, he suggested that the increase is likely due at least in part to an actual increase in HAB. Warmer water temperatures resulting from climate change have tentatively been associated with algae blooms, though research is continuing on the subject.

To those who consume seafood, Arthur suggested, "You have to be careful and know where things come from. Don't just walk along the beach, pick up an oyster or mussel, and pop it into your mouth." Watch the news for "red tide alerts" and, when dining at a seafood restaurant, "use the buddy system," he advised, "so that you can notice physical or behavioral changes in each other that might signal shellfish poisoning."

Caution is the watchword, because although "Red Tide" may not be a horror movie, its impact can be pretty horrific.