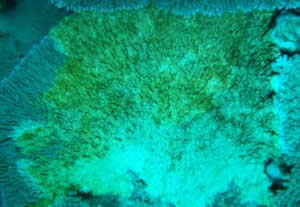 HONOLULU, Hawaii -- A new indicator of coral health has been discovered in a community of microscopic single-celled algae called dinoflagellates. The study, released in the July 8th edition of the journal Proceedings of the National Academy of Sciences, reveals that a particular type of these algae renders corals more susceptible to disease.

"Corals are fascinating organisms whose survival is dependent on dinoflagellates that live inside the coral's tissue," says lead author Michael Stat, an assistant researcher at the Hawaii Institute for Marine Biology (HIMB) at the University of Hawaii at Manoa. "The relationship between these dinoflagellates and corals has long been considered mutually beneficial, with the dinoflagellates supplying the coral with food via photosynthesis in return for recycled nutrients and shelter. Over the last 20 years it has been made clear that there are many different types of dinoflagellates in corals and that the unions or symbiosis between a given coral and their dinoflagellates can be very specific."

It had previously been considered that all dinoflagellates found in coral are equally beneficial to their coral host, but in this study Stat, along with HIMB researchers Ruth Gates and Emily Morris, present evidence that a particular type of dinoflagellate can be found in corals that are diseased or show evidence of having had a disease.

"We show that this same symbiont, called "clade A", does not produce as much food that can be used by the coral as other types of coral dinoflagellates," says Stat. "We suggest that because these coral are not receiving enough food they become more prone to disease."

The researchers sampled corals that appeared healthy and corals that appeared diseased from French Frigate Shoals in the Papahanaumokuakea Marine National Monument in the Northwestern Hawaiian Islands (NWHI). By using genetic analyses, they were able to identify the type of dinoflagellate that was present in each of these corals. They found that the healthy coral contained one type of dinoflagellate and the diseased coral contained a different type of symbiont.

"We have discovered that a group of diseased corals in the NWHI associate with a type of endosymbiotic algae that has never been found in Hawaiian corals before," says co-author Ruth Gates, an Associate Researcher at HIMB. "Our analyses suggest that these endosymbiotic algae are not providing the coral with nutrition and that the corals may be starving, making them more susceptible to disease."

To mimic the inside of coral tissue, they performed lab-controlled experiments looking at the amount of carbon produced and released by different coral dinoflagellates in an artificial environment. They found that the dinoflagellate found in healthy coral produced large amounts of carbon that it released into the outside environment, making it available to a coral as a source of food. In contrast, the dinoflagellate found in diseased coral produced a very small amount of carbon and did not release any to the outside environment to make available to a coral host as a source of food.

"Just as we have tests for human diseases such as cancer and tuberculosis, we now have the ability to screen corals for disease susceptibility," says Gates. "This discovery is a key finding that will contribute to the conservation and protection of ecologically important corals in Hawaii and elsewhere."

"This work shows for the first time that different types of coral dinoflagellates are not equally beneficial, and that there is a link between the type of dinoflagellate and coral disease," says Stat. "We also suggest that some dinoflagellates living inside coral may be acting more as a parasite than a mutualistic symbiont. The next stage in our research is to further understand the range of interactions between coral and dinoflagellates and to determine whether some types are directly harming the coral and acting as parasites."