Wal-Mart Sued Over Boy's Dive Stick Impalement; 'He Landed On It and It Went Into His...' 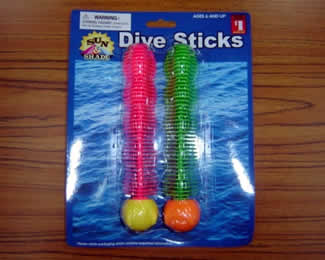 TAMPA, Florida -- Lawyers representing a Bay area child are in a St. Petersburg courthouse…..taking on corporate giant Wal-Mart, and a product supplier seeking millions in damages.

The case centers around swimming pool toys known as dive sticks, supplied to Wal-Mart in the 1990's by a Clearwater based Florida Pool.

When Marcus Zunner was just three, he was hospitalized with a severe accident from a divestick.

"He slid into the pool on the slide and he landed on it and it went into his rectum," said Kimberly Zunner, Marcus' mother.

"He suffered a rectal impalement of about an inch and a half. And he had open abdominal surgery, with a cholostomy," said Justin Johnson, Marcus' attorney.

WalMart and Florida Pool, are expected to argue the dive sticks were safe, but that the family misused them, by allowing the child to jump on the sticks in a shallow, inflatable kiddie pool.

The stick's are weighted to stand perpendicular to the bottom of the pool, and when they are three to seven feet underwater, kids often dive after them in order.

But in shallow water, they may stand just inches below the surface which was apparently what happened when Marcus jumped in.

The company responded in a news release.

Florida Pool, 1999 news release: "Dive sticks are fun and enjoyable when used properly but are not to be used in shallow water." That recall came after six known injuries were reported to the CPSC, and one year before Marcus' Zunner was hurt landing on a dive stick.

Those close to Marcus worry he will need a lifetime of medical care and multiple surgeries as a result of the dive stick accident at a young age.

Marcus Zunner is now nine, and according to his lawyer, is doing as well as can be expected.

His lawyer says Marcus will be here at points during the trial, but is not expected to testify.