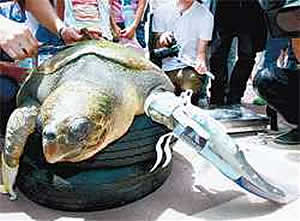 The loggerhead sea turtle tries on her artificial flippers in Kobe.

KOBE, Japan -- Tests on artificial flippers for a loggerhead sea turtle with only two limbs started here over the weekend in an attempt to return the turtle to the wild.

The Osaka‐based nonprofit organization Sea Turtle Association of Japan is leading the rehabilitation project for the loggerhead sea turtle that lost its two forelimbs. The turtle, wearing sample artificial flippers, was released into a saltwater pond located at Kobe's offshore airport island on June 20.

"There has only ever been one known case of trying to fit a sea turtle with artificial limbs and that was in the U.S. If this turtle can swim stably with our artificial flippers, it will be a global first," said an association official.

The loggerhead sea turtle is female and believed to be around 20 years old. The turtle was caught in a fishing net last June in the Kii Channel with half of its left forelimb and one‐third of the right forelimb missing. It had apparently been attacked by a shark.