Research: Up to 10 Years for Seafloor to Recover from Bottom Trawling; 'No good habitat, hardly any fish'

Research: Contrary To Recent Hypothesis, 'Chevrons' Are Not Evidence Of Megatsunamis; 'Wind' 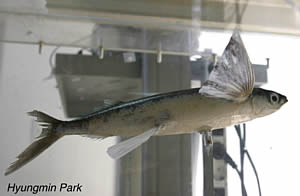 CAMBRIDGE, U.K. -- We're all familiar with birds that are as comfortable diving as they are flying but only one family of fish has made the reverse journey. Flying fish can remain airborne for over 40 seconds, covering distances of up to 400m at speeds of 70km/h.

Haecheon Choi, a mechanical engineer from Seoul National University, Korea, became fascinated by flying fish when reading a science book to his children. Realizing that flying fish really do fly, he and his colleague, Hyungmin Park, decided to find out how these unexpected fliers stay aloft and publish their discovery that flying fish glide as well as birds on 10 September 2010 in The Journal of Experimental Biology at http://jeb.biologists.org.

But getting hold of flying fish to test in a wind tunnel turned out to be easier said than done. After traveling to Japan to try to buy fish from the world famous Tsukiji fish market, the duo eventually struck up a collaboration with the National Federation of Fisheries Cooperatives of Korea. Park went fishing in the East Korean Sea, successfully landing 40 darkedged-wing flying fish. Selecting five similarly sized fish, Park took them to the Korean Research Centre of Maritime Animals, where they were dried and stuffed, some with their fins extended (as in flight) and one with its fins held back against the body, ready to test their aerodynamics in the wind tunnel. Fitting 6-axis force sensors to the fish's wings and tilting the fish's body at angles ranging from 0𐍻 degrees to 45 degrees, Park and Choi measured the forces on the flying fish's fins and body as they simulated flights.

Calculating the flying fish's lift-to-drag ratios â a measure of the horizontal distance traveled relative to the descent in height during a glide â Choi and Park found that the flying fish performed remarkably well: gliding better than insects and as well as birds such as petrels and wood ducks. And when they analyzed how the fish's lift-to-drag ratio changed as they varied the tilt angle, the duo found that the ratio was highest and the fish glided furthest when they were parallel to the surface, which is exactly what they do above the ocean. Measuring the airborne fish's pitching moment, the duo also found that the fish were very stable as they glided. However, when they analyzed the stability of the fish with its fins swept back in the swimming position it was unstable, which is exactly what you need for aquatic maneuverability. So flying fish are superbly adapted for life in both environments.

Knowing flying fish always fly near the surface of the sea, Choi and Park then decided to find out if the fish derived any benefit from the aerodynamic effect of flying close to the surface. Lowering the fish's height in the wind tunnel they found that the lift-to-drag ratio increased as the fish models 'glided' near the floor. And when Park replaced the solid surface with a tank of water, the lift to drag ratio rose even more, allowing the fish to glide even further. So, gliding near the surface of the sea helps the fish to go further.

Finally, Choi and Park directly visualized the air currents passing around the flying fish's wings and body. Blowing streams of smoke over the fish, the duo saw jets of air accelerating back along the fish's body. Park explains that the tandem arrangement of the large pectoral fin at the front and smaller pelvic fin at the back of the fish's body accelerates the air flow towards the tail like a jet, increasing the fish's lift-to-drag ratio further and improving its flying performance even more.

Having shown that flying fish are exceptional fliers, Choi and Park are keen to build an aeroplane that exploits ground effect aerodynamics inspired by flying fish technology.