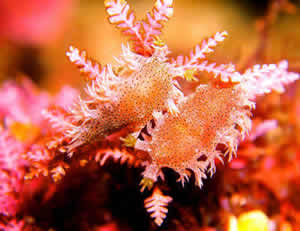 TAIPEI, Taiwan -- A new species of sea slug was discovered last month off the coast of Green Island by Taiwanese marine biologist Chen Ming-huei. It has been temporarily nicknamed "little strawberry" until an official name can be determined.

Chen, a research assistant at the National Museum of Marine Biology and Aquarium, found the slug while conducting a survey of soft-body animals.

Chen and his team were commissioned by the Taiwanese Coral Reef Society to investigate the marine life in the area to determine whether Green Island should be included in the Construction and Planning Agency's plan to establish a marine park along the Dong Sha Atoll.

Chen reportedly set a new record by finding more than 30 species of sea slugs native to Green Island during his survey.

To confirm his finding, Chen sent an e-mail to a sea slug expert, Richard Willan -- the curator of molluscs at the Northern Territories Museum in Darwin, Australia.

Willan confirmed that "little strawberry," a type of nudibranch, which belongs to the Trotonia species, was a new discovery.