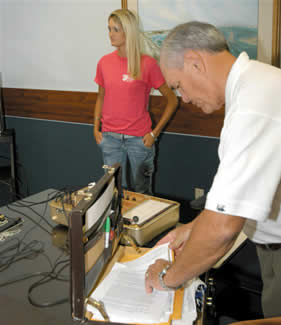 Neil Rucker (right), a polygrapher, prepares to test Cherie Mills (left), in response to a protest

DESTIN, Florida -- Cherie Mills grinned widely as she walked out of the board room at the Destin Community Center.

For the previous 15 minutes, Mills had been in the board room taking a lie detector test administered by a polygrapher from Daphne, Ala. At issue was whether she caught one of the first-place sharks last week during the 21st Destin Deep Water Shark tournament.

A protest was made to the shark tournament’s rules committee, contesting she didn’t catch the 480-pound tiger shark on the Teaser Too with Capt. Ken Jorgensen. Her shark won the tournament’s lady angler division and its $1,110 purse.

The crew of the Moon Dance, the boat that landed the lady angler’s second-place shark, paid the tournament’s $500 protest fee and paid for the polygraph test to be administered, which cost $400.

“I’m very excited,” Mills said as she walked out of the board room. “This was worse than the fight with the shark.”

Daniel Adams, Mills’ fiancee, was on the Teaser Too when she caught the fish, and said after the fight with the shark that she deserved to pass the polygraph.

“She worked so hard for this fish, I’d hate to see someone take that away from her,” he said. “She was going to do whatever it took. She was confident but nervous — she’s never taken a polygraph before.”

After Mills was told by the polygrapher that she passed, Jim Roberson and David Gaetz, representing the shark tournament’s rules committee, conferred briefly and then informed Mills that she passed the test and was the winner of the tournament’s lady angler division.