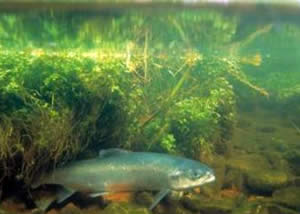 HALIFAX, Nova Scotia -- Since the late 1970s, salmon aquaculture has grown into a global industry, producing over 1 million tons of salmon per year. However, this solution to globally declining fish stocks has come under increasing fire. In a new study published this week in the open-access journal PLoS Biology, Jennifer Ford and Ransom Myers provide the first evidence on a global scale illustrating systematic declines in wild salmon populations that come into contact with farmed salmon.

Previous studies have clearly shown that escaped farm salmon breed with wild populations to the detriment of the wild stocks, and that diseases and parasites are passed from farm to wild salmon. However, until now, there has been no assessment of the importance of these impacts at the population level and across the globe. Here, Ford & Myers compared the survival of salmon and trout that swim past salmon farms to the survival of those fish that never pass a salmon farm.

In five regions around the world, Ford and Myers find a significant decline in the survival of wild salmon populations that are exposed to salmon farms. This decline took place as farmed salmon production increased in each region. Combining these regional estimates, the authors find that wild populations suffer a reduction in survival or abundance of more than 50% when associated with farmed salmon.

These new results suggest that salmon farming could seriously compromise the persistence of the world’s salmonid populations.