Rare Albino Ratfish With Eerie, Silvery Sheen Caught Off Washington Coast; 'It Must Have Been Like A Beacon'

An albino ratfish -- pure white except for pale green eyes -- was caught off Whidbey Island during sampling. credit University of Washington 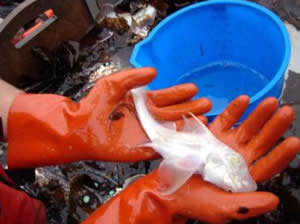 SEATTLE, Washington -- A ghostly, mutant ratfish caught off Whidbey Island in Washington state is the only completely albino fish ever seen by both the curator of the University of Washington's 7.2 million-specimen fish collection and a fish and wildlife biologist with more than 20 years of sampling fish in Puget Sound.

"Ratfish usually hang out in places with soft, muddy bottoms," says Jon Reum, the aquatic and fishery sciences doctoral student who found the albino ratfish during a UW research project. "The typical ratfish in Puget Sound is brown or black with a smattering of white spots so it blends in with the sediments."

This fish was almost pure white with a crystalline layer near the surface of its skin that gave it a silvery sheen.

"It must have been like a beacon," says Ted Pietsch, UW professor of fisheries and aquatic sciences and curator of the UW fish collection. "Why didn't it get eaten, long before this, by some predator, for example, by a spiny dogfish so common in Puget Sound and that love to devour ratfish""

The foot-long female may have been 2 or 3 years old, Reum and Pietsch estimate, making her a teenager in the ratfish world.

She was caught this summer in about 200 feet of water during a UW research project examining the food web in Hood Canal and Puget Sound. Puget Sound is the nation's second-largest estuary in the Lower 48 after Chesapeake Bay. The city of Seattle, home to about 4 million people, is built on its shores. Puget Sound connects to the Pacific Ocean via the Strait of Juan de Fuca to the north.

An albino ratfish -- pure white except for pale green eyes -- was caught off Whidbey Island during sampling for a University of Washington project to bettter understand the food... Click here for more information.

Albinos, found among mammals, fishes, birds, reptiles and amphibians, have a gene mutation that keeps them from making the pigment melanin. The condition is rare in sea life, Pietsch says. He could find only a handful of sightings of albino sharks, and none of albino ratfish, though ratfish are common and abundant in many places around the world. Puget Sound, for example, is filled with a greater number of ratfish, by far, than any other fish, Reum says. In the June survey that turned up the albino specimen, researchers counted 7,100 ratfish compared to 2,300 English sole, the second most prevalent fish in that sampling.

"I've seen tens of thousands, if not hundreds of thousands, of ratfish in my career, and have not seen a completely albino one before," says Wayne Palsson, a Washington Department of Fish and Wildlife biologist who studies groundfish populations in Puget Sound. "I've seen lightly colored or partially albino ratfish but never completely albino." Palsson says the only other pure albino marine organism of any kind that he's seen in Puget Sound was a sea cucumber collected near UW's Friday Harbor Laboratories in the '90s.

Ratfish are probably so-called because they have tails that are exceptionally long and streamer-like. To move through the water they flap large, wing-like pectoral fins on their sides

There are 33 species around the world, but only one is found in Puget Sound, the white-spotted ratfish. They can grow as long as 3 feet. Like sharks and rays, ratfish have skeletons composed of cartilage instead of bone.

After the albino ratfish was caught the researchers attempted to keep her alive in a bucket of water but, in spite of boards placed over the top, she managed to flip out of the bucket onto the deck during the night. She is now preserved and part of the UW Fish Collection, which has 82 other ratfish specimens, ranging from eggs to full-grown adults. The collection, which focuses on North Pacific and Bering Sea fishes, is needed by researchers on and off campus to identify species and to understand fish biology and conservation.

Pietsch says ratfish seek meals of sea-bottom worms, crabs and clams by burrowing their snub snouts into the mud and using special sensors in their heads to detect the faint electrical signals given off whenever animals use their muscles.

Powerful jaws and grinding teeth able to crack the shells of crabs and clams require caution by researchers and fishermen who handle them. Ratfish don't bite divers or swimmers in the water, Reum says, but they get snappish when brought on board.

And then there's that venomous spine.

Located on their back, just in front of the dorsal fin, ratfish have a spine several inches long that is serrated on one edge, needle sharp at the tip and delivers an irritating venom. The spine could be the reason the only predators to eat Puget Sound ratfish are dogfish and six-gill sharks, both able to gulp ratfish down whole and headfirst, Reum and Pietsch say.

The Hood Canal food-web survey, funded by the National Oceanic and Atmospheric Administration and the Hood Canal Dissolved Oxygen Program, is led by UW assistant professor Tim Essington. He also has SeaDoc Society funding to examine another aspect of the Puget Sound food web using historical trawl records to create a database of fish abundance over time. It seeks to find, for instance, whether ratfish have always been so numerous or whether changes in their main predators allowed them to flourish.

As far as humans eating ratfish, Reum says New Zealand is the only place he knows where there is a commercial fishery. They're used for fish and chips.

Has Reum ever tasted ratfish" A spasm of dismay briefly crosses his face at the thought. Then he laughs.

"We're always challenging each other during our expeditions to eat one, but, they're just a really greasy fish. And they really stink. Their stomach contents and juices are particularly foul."