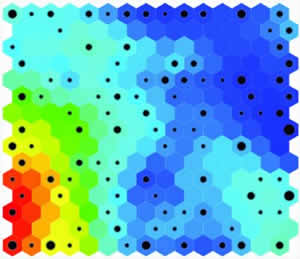 WASHINGTON, D.C. -- In line with the U.S. Department of Energy (DOE) interest in characterizing the biotic factors involved in global carbon cycling, the DOE Joint Genome Institute (JGI) characterizes a diverse array of plants, microorganisms, and the communities in which they reside to inform options for reducing and stabilizing atmospheric greenhouse gases.

Through a novel genomic approach detailed in the September 7 online edition and on the cover September 14 of the journal Proceedings of the National Academy of Sciences, an international team of scientists led by the University of New South Wales and the DOE JGI demonstrates how the microbial diversity of the oceans can be analyzed without necessarily cultivating samples in the laboratory.

"The model we describe is useful in studying whole marine microbial communities, or metagenomes, to better understand how communities in specific locations are evolving," said senior author Rick Cavicchioli of the University of New South Wales. "In essence, by analyzing and comparing the strategies of the dominant organisms we should have an idea of the carbon flux going through the environment which in turn will be affected by global warming.

The oceans, which make up 71 percent of our planet's surface, are home to microorganisms that are adapted to life strategies along a continuum of two extremes: those that thrive in nutrient-rich waters often associated with warmer regions and those that prefer nutrient-poor waters. Collected from waters off the Alaskan coast, the bacterium Sphingopyxis alaskensis was sequenced by the DOE JGI under the DOE's plan to study the biochemical pathways in microbial genomes and lay the groundwork for technologies based on that data which might be used to reduce greenhouse gas emissions. This bacterium, which has a nutrient-poor lifestyle, serves as a model microorganism that thrives in low-nutrient waters and is key to carbon sequestration in the oceans.

Cavicchioli and his lab compared the traits of S. alaskensis' genome against the genome of Photobacterium angustum, a bacterium collected and sequenced from the warmer, nutrient-rich waters off Sydney, Australia. They then tested the model developed based on these two genomes to successfully predict whether several dozen bacterial samples were those that grow in nutrient-rich environments like P. angustum or under nutrient-poor conditions, like S. alaskensis.

The researchers' findings also supported a long-held theory that though more microbial genome projects involve bacteria adapted to more nutrient-rich environments, in part because they are easier to cultivate, bacteria like S. alaskensis are more representative of microorganisms that are abundant and ecologically significant in the biosphere. DOE JGI Genome Biology Program head and study co-author Nikos Kyrpides said the finding supports the need to develop better techniques to isolate such microorganisms from nutrient-poor environments and sequence their genomes in order to better reflect the microbial biodiversity.

"The method used by Cavicchioli's group to predict bacterial habits lends credence to the idea that sequencing cultivated organisms is biased toward sequencing those that thrive in nutrient-rich conditions, even though those that get by in nutrient-poor conditions are more abundant in the environment," Kyrpides said. "Despite the number of microbial genome projects being done, these organisms represent just a fraction of the microbial diversity on the planet. To sequence microbial genomes that are representative of the environments in which they were collected and for a more systematic and comprehensive sampling of the Tree of Life, researchers need to increasingly develop and rely on other techniques such as single-cell sequencing to isolate DNA samples from harder-to-cultivate microbes residing in environments where nutrients are scarce."

Kyrpides' words were echoed by DOE JGI collaborator Ramunas Stepanauskas of the Bigelow Laboratory for Ocean Sciences, who said the model developed by Cavicchioli's team supports his own group's use of cultivation-independent, single-cell sequencing of marine microbes. "What the Australian group together with the DOE JGI has demonstrated is a more rigorous way of testing the long-standing notion that cultured microorganisms are biased toward the species that are adapted to nutrient-rich environments, which is, in effect an over-representation of their true abundance in the biosphere," he said. "Using their model, we can demonstrate that novel research tools, such as metagenomics and single-cell genomics, provide us with data of ecological relevance without biases due to microbial adaptations to incredibly diverse life strategies."

Cavicchioli said the researchers plan to apply the model to studying the microbial communities' relationships with climate change. As an example, he cites the end of phytoplankton bloom, which is believed to be relatively nutrient rich even in the absence of a chlorophyll spike. "A natural extension is to assess and monitor gene function," he said. "Now that we know 'who' is present, and what their 'lifestyle' is, we can ask, what exactly are they doing – assessing function."