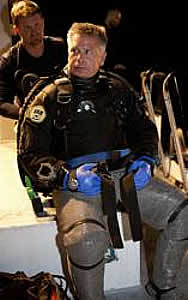 Scott Cassell prepares to take on the biggest challenge of his life - the 30-mile dive. Photo Credit: Brett Van Ort

LOS ANGELES, California -- On Saturday, September 17th undersea explorer and combat diver Scott Cassell completed a 30-mile dive from Catalina Island to San Pedro, California. The astonishing feat that pushed his body to the physical edge, even causing him to black out underwater for a brief period, was all in an effort to bring attention to the endangered shark species that is virtually on the edge of extinction before it becomes too late, an unseen crisis that Cassell has dedicated his life to.

Cassell's goal of this attempt for furthest uninterrupted dive was to be underwater for as long and far as possible in order to shed light on just how few sharks he would encounter in an area once known for its flourishing shark population. Cassell completed the 30-mile dive in roughly 11-hours but was forced to give up on his world record dreams when he needed to resurface at the 5-hour mark; he blacked out underwater after experiencing a massive equipment malfunction, cutting off his air support that nearly cost him his life. Though the world record was lost, Cassell's mission remained unwavering as he battled through hypothermia and extreme dehydration to complete the 30-mile dive.

The Findings: Cassell is an experienced professional diver and ocean activist who has long dived in the Catalina Channel. According to Cassell, this area would produce between 40 to 100 sharks in a single dive less than 20 years ago. However, confirming his worst fear, he encountered literally no sharks during his 11 hours underwater on Saturday, even swimming with the support of shark attractors for all 30-miles.

Supported by a volunteer crew of more than 30 individuals, 3D video cameras from non-profit Global Reef and others followed Cassell's 30-mile dive journey chronicling everything from the physical and mental preparation that goes into this type of attempt, to his heartbreak when he realized the drastic population loss of sharks over the last 20 years. The resulting film will be represented at this year's MIPCOM festival in Cannes, France and more on the dive can be viewed now on Global Reef's blog http://www.30miledive.com and http://www.luminox.com/diving-worldrecord/.

"There are species of sharks that are on the edge of extinction and we need to do something about this before it becomes too late," said Scott Cassell. "Sharks are not the villains depicted in films. They are highly intelligent, emotional and a critical component to our eco-system and marine world. If we continue to allow for sharks to be viciously hunted and be used for things like shark fin soup, there is no chance that we can save this vital population which has been in our oceans for more than 5 million years, ensuing a massive trickle down effecting the entire marine ecosystem that will eventually threaten yields of other commercially important species."

Alarming Statistics: Cassell's findings are unfortunately not a unique circumstance to the Catalina Channel. The shark population around the world is being killed off in mass quantities potentially causing a permanent and life-altering effect for the marine-world, as we know it:

Scott Cassell Luminox Dive Series: Serving as the lifeline on his wrist during diving expeditions, Luminox helped make his 30-mile dive dream a reality. The essential gear brand is a proud sponsor of Scott Cassell and avid supporter of his work to save our oceans and sharks.

"I've never encountered someone like Scott. His undying love for the ocean and sharks and self-sacrificing tactics, all to raise awareness to the masses is something I find to be a true inspiration. Scott put his life on the line this weekend not for any personal gain or attention, but to help save the animal he loves. Luminox has made a commitment to Scott to get his message out to the world and we will not stop until his voice is heard and this issue is brought to light," said Andre Bernheim co-CEO Luminox. "Today we are so proud to announce the limited edition Scott Cassell Luminox dive series and continue to aid in Scott's mission."