Study: 40 Percent Of The World’s Oceans Are Heavily Impacted By Human Activities; 'More Than Expected' 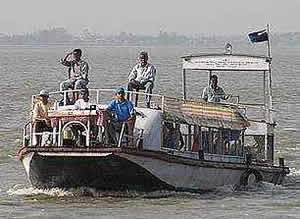 WASHINGTON, D.C. -- Dolphin hotspots must be protected if the Ganges River Dolphin (Platanista gangetica gangetica) is to survive in the Brahmaputra river system, according to a recent study.

Estimates have put the total population of the Ganges River Dolphins at around 2,000. Out of these, between 240 to 300 inhabit the Brahmaputra River system in India, according to a recent survey by an IUCN Sir Peter Scott Fund project.

“Our research shows accidental killing through fisheries by-catch, followed by poaching for oil, are the major threats to the dolphins of the Brahmaputra river system,” says Project Leader Abdul Wakid. “Their habitat is also being degraded by human activities. Dam building and a proposed seismsic survey in the Brahmaputra river are potential threats.”

The project, funded by Fondation Ensemble, was prompted by the need for some robust dolphin population data after Oil India Ltd. proposed to start prospecting for oil along the bed of the Brahmaputra River using air guns and explosives.

The research identified eight river sections as potential protected areas and community-based dolphin conservation as the best strategy to save the dolphins.

“The Brahmaputra River is very important habitat for these endangered dolphins,” says Gill Braulik, of IUCN’s Cetacean Specialist Group. “To protect them it is vital that we involve local river communities. In some places, like in the Kukurmara area of Kulsi River, for example, the dolphins are a tourist attraction due to protection by local communities. But in other areas, dolphins are accidentally killed in fishing nets or are sometimes deliberately caught and killed for their oil.”

The project carried out 32 awareness campaigns along the Brahmaputra valley, focusing on fishing communities in areas surrounding dolphin hotspots.

The Ganges River Dolphin is found mainly in the Ganges and Brahmaputra river systems in India and Bangladesh. This survey concentrated on the 1,044km stretch of dolphin-inhabited Brahmaputra River system, primarily in Assam of North East India. In a 2005 survey in the same river stretch by the same investigating group a best estimate of 250 dolphins was recorded.