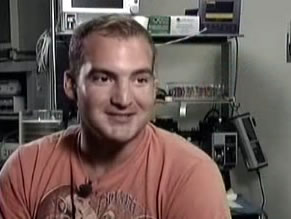 Dave after the shark kiss

MIAMI, Florida -- A South Florida diver, who enjoys swimming with sharks, ends up hospitalized after he decided to kiss one and the shark kissed back.

It was a decision that left the amorous diver with a severely damaged lip that required extensive reconstruction surgery.

Dr. Sean Kenniff spoke to diver Dave Marcel about a month after the underwater encounter in the waters off Key Largo.

"You kind of pick them up, rub their belly, scratch them, hug them,” Marcel said, “You might as well give them a smooch while you're out there."

He's done it hundreds of times before, but this time the love bug bit back sinking five hundred razor sharp teeth into his lips.

Then in a pool of blood, with his lip hanging like a worm, the snappers came in for a few bites too.

Miami cosmetic surgeon Dr. Mike Kelly has seen almost everything, but even he's never seen this.

"Dave's lip looked like it had been put through a meat grinder or a garbage disposal. I mean it was a hundred little pieces," Dr. Kelly said.

It was supposed to be just a little kiss. When it comes to shark bites most people think of a Great White or a Tiger Shark. But believe it or not, bites from nurse sharks are not uncommon. Although they have a reputation for being docile animals, it's important to remember they are also wild animals.

"Basically it was a matter of completing the jigsaw puzzle and putting the pieces back together again," he said.

And in this school of fish, Dave has learned his lesson the hard way.

"Don't kiss a nurse shark while it's upside down," Dave said.

Better still, don't kiss them at all.

It is not common for nurse sharks to spontaneously attack humans, but they can attack when provoked.

Dave's kiss must have been quite a provocation.