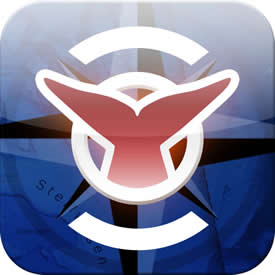 Whale Alert, a free app, can be downloaded from the App Store. Credit: NOAA 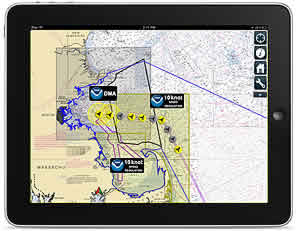 Mariners operating along the U.S. east coast can receive all relevant right whale management initiatives and warnings via their iPad & iPhone

SILVER SPRING, Maryland -- Mariners along the U.S. east coast can now download a new iPad and iPhone application that warns them when they enter areas of high risk of collision with critically endangered North Atlantic right whales. The free Whale Alert app provides one source for information about right whale management measures and the latest data about right whale detections, all overlaid on NOAA digital charts.

"Whale Alert represents an innovative collaboration to protect this critically endangered species," said David Wiley, NOAA's Stellwagen Bank National Marine Sanctuary research coordinator and project lead. "Whale conservation is greater than any one organization and this project shows how many organizations can unite for a good cause."

A key feature of Whale Alert is a display linking near real-time acoustic buoys that listen for right whale calls to an iPad or iPhone on a ship's bridge showing the whale's presence to captains transiting the shipping lanes in and around Stellwagen Bank National Marine Sanctuary. "The idea that right whales are directly contributing to conservation through their own calls is pretty exciting," said Christopher Clark, whose team at the Bioacoustics Research Program at the Cornell Lab of Ornithology helped develop the acoustic detection and warning system.

"Massport is proud to be part of this effort. We are working with our cruise and shipping vessel partners to educate mariners about the whales, and the importance of this great new tool," said Michael Leone, port director for the Massachusetts Port Authority. "The maritime community has always sought ways to increase right whale survival. Whale Alert does this by using science and technology to let mariners know where their vessel is in relation to the whales and conservation measures."

The link to the listening network is only part of what Whale Alert does. The app uses GPS, Automatic Identification System, Internet and digital nautical chart technologies to alert mariners to NOAA's right whale conservation measures that are active in their immediate vicinity. NOAA, through its NOAA Fisheries Service, is the U.S. agency with responsibility for protecting and recovering this endangered species.

"Endangered right whales are particularly vulnerable to being hit and killed by ships, but we can save them," said Patrick Ramage, global whale director for the International Fund for Animal Welfare and one of the collaborators on Whale Alert. "Right whales need dramatic conservation progress to survive. This new iPad app gives these whales a fighting chance."

"The app also moves whale conservation into the 21st century," said Brad Winney co-founder of EarthNC, the developer of the Whale Alert mobile application. "Whale Alert highlights the powerful role today's web and mobile based technologies can have in the preservation efforts of endangered species worldwide."

Whale Alert can be downloaded free of charge from the App store. More information on Whale Alert and the groups responsible for its development can be found at http://stellwagen.noaa.gov/protect/whalealert.html