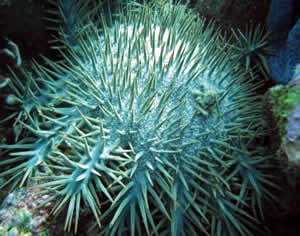 Outbreaks of crown of thorns starfish threaten the heart of the Coral Triangle in Indonesia. Credit: Wildlife Conservation Society

Outbreaks of the notorious crown of thorns starfish now threaten the "coral triangle," the richest center of coral reef biodiversity on Earth, according to recent surveys by the Bronx Zoo-based Wildlife Conservation Society and ARC Centre of Excellence for Coral Reef Studies.

The starfish – a predator that feeds on corals by spreading its stomach over them and using digestive enzymes to liquefy tissue – were discovered in large numbers by the researchers in reefs in Halmahera, Indonesia, at the heart of the Coral Triangle, which lies between Indonesia, Malaysia, the Philippines, Papua New Guinea and the Solomon Islands. It is considered the genetic fountainhead for coral diversity found on Australia's Great Barrier Reef, Ningaloo and other reefs in the region.

Scientists fear the outbreak is caused by poor water quality and could be an early warning of widespread reef decline.

Recent surveys of Halmahera by the Wildlife Conservation Society and ARC Centre of Excellence for Coral Reef Studies confirmed that while Halmahera's reefs are still 30-50 percent richer than nearby reefs, some areas were almost completely destroyed.

"The main cause of damage to the corals was the Crown of Thorns Starfish," Dr. Andrew Baird of the ARC Centre of Excellence for Coral Reef Studies and James Cook University. "We witnessed a number of active outbreaks of this coral predator. There was little to suggest that the reefs have been much affected by climate change as yet: the threats appear far more localized."

The team also saw first-hand evidence of recent blast-fishing, an extremely destructive fishing practice that uses explosives. According to locals this accompanied a break down of law and order following communal violence in 2000-2003. During the same time many reef lagoons were mined of their corals for use in construction, an activity encouraged by the Indonesian military.

"This is clearly a complex human environment and effective management of the marine resources must address the needs of communities. It will also be vitally important to understand the causes of conflict among communities and address them," says Dr Stuart Campbell, Program Leader for the Wildlife Conservation Society's' Marine Program in Indonesia.

The researchers pointed out that there were still healthy populations of certain species – and still time to reverse the damage.

"The good news is that the reef fish assemblages are still in very good shape" said Tasrif Kartawijaya from WCS-IP. "We saw Napoleon wrasse and bumphead parrot fish at almost every site. So these reefs have the capacity to recover if we can address the current threats."

The Coral Triangle Initiative (CTI) announced by six regional governments at the Bali Climate Change Conference recently offers hope for the reefs in the region, the researchers say. However, there are few details of how it will work and no mention of the fundamental role of research in the conservation program.

"We are disappointed research is yet to be fully considered in the CTI. The success of large marine parks, like the Great Barrier Reef Marine Park, is largely due to the primary role of science plays in understanding what's going on, so managers can make good decisions," said Dr Baird.

"It isn't enough just to document the diversity of the region. Large scale research is required to understand the Coral Triangle ecosystems and work out how best to respond to threats such as poor water quality and overexploitation," Dr Campbell added.