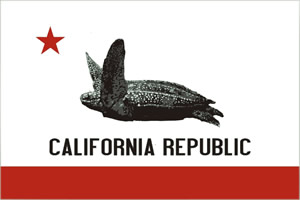 SACRAMENTO, California -- In a strong affirmation of the Golden State's commitment to the environment, Governor Brown today designated the endangered Pacific leatherback sea turtle as California's official state marine reptile by signing into law Assembly Bill (AB) 1776 by Assemblymember Fong (D- Cupertino). As sponsors and supporters of the bill, SeaTurtles.org and Oceana applaud Governor Brown and the State Legislature for providing a first of its kind recognition of the importance of this critically endangered species to the state's marine ecosystem.

Leatherback sea turtles are best described by superlatives: they are an ancient lineage outsurviving the dinosaurs; they are the largest sea turtle on Earth; they can dive to a depth of over half a mile,-- as deep as the giant whales; they have one of the longest migrations of any animal (6,000 miles across the entire Pacific), and unfortunately, are the most endangered sea turtle in the Pacific due to incidental capture in industrial fishing drift nets and longlines.

Per the new state law, October 15, 2013 will be California's first annual Leatherback Conservation Day. Schools will be encouraged to teach students about this centuries-old sea turtle species that makes an incredible 6,000 mile journey from Indonesia to the California coast to feed on jellyfish.

"By designating the Pacific leatherback sea turtle as our state marine reptile, California joins a coordinated worldwide conservation effort," said Assemblymember Fong, who introduced the bill. "This bill demonstrates California's commitment to protecting our ocean's ecosystem and a species whose population has declined more than 95 percent and whose migratory pattern includes California's coast."

"California has now established itself as a national leader in promoting conservation of Pacific leatherbacks, which have survived in the Pacific Ocean for over 100 million years but are now being driven to extinction by fisheries bycatch, poaching, and plastic pollution," said Dr. Chris Pincetich, marine biologist with www.SeaTurtles.org, the primary architect and sponsor of AB 1776."I can now imagine that in the near future I will be able to visit a California classroom and all the students will have learned about leatherbacks, their critical habitat offshore, and ways they can take action to ensure their continued survival. Right now, students that have even heard of them are in the minority."

More than 16,000 square miles of California's coastal waters were designated as critical habitat for leatherbacks earlier this year. However, more needs to be done as the most recent nesting surveys are showing continued declines for the population that utilizes California waters. This new law will encourage state and federal agencies to build cooperative relationships with island nations where Pacific leatherback sea turtles return to nest in order to increase awareness and conservation of this critically endangered species.

"By recognizing the Pacific leatherback as the newest state symbol, Governor Brown continues California's leadership in ocean conservation," said Ashley Blacow, Oceana's Pacific Policy and Communications Coordinator. "Pacific leatherbacks are on the brink of extinction, and public awareness is a key ingredient to turning the tide for these ancient marine reptiles."