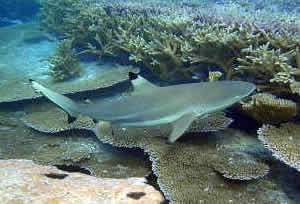 This is a blacktip reef shark. Credit: Yannis Papastamatiou

GAINESVILLE, Florida -- Some shark species are able to navigate to specific locations up to 50km away, a new study published in the British Ecological Society's Journal of Animal Ecology has found. Re-analysing tracking data from tagged sharks, ecologists found that while some species such as blacktip reef sharks swim in a pattern known as a "random walk", others such as tiger sharks can at times hunt for prey or mates by using "directed walks", accurately navigating long distances across open ocean, often at night.

To maximize lifetime fitness, animals should optimize search patterns for finding food, mates and safety. In new and unfamiliar locations, animals use different types of random walk. However, many animals occupy large home ranges where they will develop mental maps of the locations of resources and use directed walks (movements to known goals) to move between these locations. Few studies have quantified directed walks in animals.

A team of US ecologists re-analyzed tracking data from three species â tiger sharks, thresher sharks and blacktip reef sharks. Working out whether or not sharks were using random or directed walks was difficult, as the researchers had no way of knowing where the animal wanted to go. But the researchers were able to tell the difference between a random walk and directed walk by looking at the shape of the sharks' movements at different spatial scales. They compared the overall distance the sharks had moved to those estimated by random walk models, mathematical equations that predicts how far an animal will move if it is moving randomly at these different scales.

According to lead author Yannis Papastamatiou of the Florida Museum of Natural History: "Our research shows that, at times, tiger sharks and thresher sharks don't swim randomly but swim to specific locations. Simply put, they know where they are going."

"We were surprised at the difference between juvenile and adult thresher sharks. Adult thresher sharks swam using more directed walks and could do this over greater distances than juveniles. We are not sure why this is, but we believe it shows that adults have learned to navigate more effectively than juveniles, or have developed better mental maps of the area they live in," Papastamatiou says.

The data show that tiger sharks not only know where they are going but can find their way to a feature at least 6-8 km ahead of them, although how they do this remains a mystery.

Papastamatiou says: "Many people could walk to a known destination 6-8km away, but imagine doing it in deep water and at night. As anyone who dives knows, finding your way around underwater without a compass is very difficult, but this is what we found tiger sharks could do."

Sharks have impressive sensory abilities. They have good hearing, vision and smell, can detect certain chemicals at very low concentrations and low frequency sounds at least several hundred hundred meters away. An increasing amount of evidence also suggests they may navigate by using the Earth's magnetic field.

As well as having developed a method for determining whether or not sharks are using directed walks, the results will ultimately help improve predictions of how changes in habitat or fishing will affect shark populations.