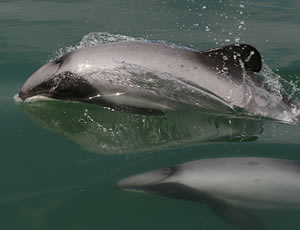 There are only an estimated 100 remaining Maui's dolphins, including this individual photographed during a 2010 survey.credit New Zealand Conservation

The future survival of the critically endangered Maui's dolphin, which is found only off the west coast of New Zealand's North Island, may have gotten a boost from the discovery of two Hector's dolphins among its sparse population.

The more plentiful Hector's dolphins are found off the South Island of New Zealand but individuals are thought to remain within a limited home range for most of their lifetime. However, genetic analysis of 26 "Maui's dolphins" by scientists at the University of Auckland and Oregon State University found that two of these individuals were actually Hector's dolphins, likely originating from the west coast of the South Island.

The discovery is important, scientists say, because previous studies indicate the remaining population of only about 100 Maui's dolphins has low genetic diversity. The threat of "in-breeding depression" has been a source of concern to the New Zealand Department of Conservation, which conducted the surveys earlier this year.

"The potential for introduction of new genetic diversity through even occasional mating with Hector's dolphins is likely to be good for the long-term survival of the Maui's dolphin," said Rochelle Constantine, a lecturer with the University of Auckland who presented the results at the meeting of the New Zealand Ecological Society today (Nov. 23) in Dunedin, N.Z.

Scott Baker, associate director of the Marine Mammal Institute at Oregon State University, said that limited interbreeding between the two subspecies "might be the best chance of survival for the Maui's dolphin."

"Human activity has contributed to isolating these populations through a reduction in the range of Maui's dolphins," said Baker, an internationally recognized cetacean expert who coordinated the genetic analysis of the dolphins. "And further isolation is likely to reduce genetic diversity, without occasional genetic interchange with the more abundant Hector's dolphins."

The two Hector's dolphins found with the Maui's dolphins were both females, Baker pointed out.

The Maui's dolphin (Cephalorhynchus hectori maui) is the world's smallest dolphin at about five feet in length and weighing about 110 pounds. They are usually found close to shore in pods of several dolphins and only occasionally range further offshore. Females are not sexually mature until seven to nine years of age and they produce just one calf every two to four years, making population increases a slow process.

"It was quite a surprise to discover the Hector's dolphins that far north because they were thought to remain quite close to their place of birth most of their lives," said Becca Hamner, a Ph.D. student from Oregon State University who works with Baker. "This is almost certainly a rare dispersal event, as none of our previous samples of Maui's dolphins showed evidence of hybridization.

"Further genetic monitoring will be needed to determine if the new emigrants survive and are able to interbreed with the Maui's dolphins," Hamner added.

The DNA analysis was done following collection of small skin samples by New Zealand's Department of Conservation and the University of Auckland. Those samples were compared to a collection of 300 samples from the known range of both Hector's and Maui's dolphins around New Zealand.

Funding for the research was provided by the New Zealand Department of Conservation and the United States Marine Mammal Commission.