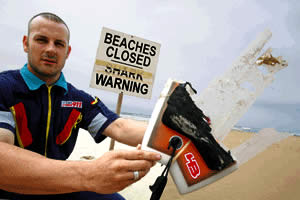 Medic Lance Parnet, with part of the surfboard, after Bonza Bay was closed. Picture: Phillip Nothnagel 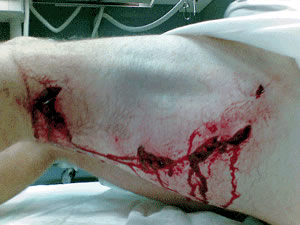 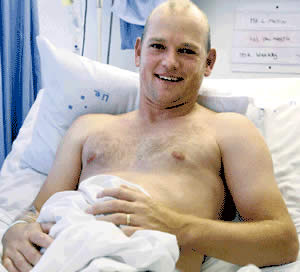 A South Africa surfer was recovering in hospital yesterday after being attacked by a monster shark – just hours before the movie Jaws was being rebroadcast on national TV.

The shark, believed to be a Great White, shattered Lee Mellin’s surf board and left a 15-inch wound down his thigh in the attack at Bonza Bay.

“The doctor said I’m the luckiest shark attack victim he has ever seen and I definitely agree,” said Mellin, 37, pointing at his bandaged left thigh yesterday.

Speaking from his hospital bed, Mellin said it was his “survivor’s instinct” that saved his life.

He remained conscious throughout the attack and yesterday gave a vivid account of his encounter with the Great White – even though it all happened “within a split second”.

Mellin and his friend, Leigh Stolworthy, were riding the waves at about 8:45am on Saturday when they saw this “big fish” close by.

“There was nothing we could do,” he said. “It just popped up between us.”

Although in pain and still counting his “lucky stars”, Mellin managed to joke and laugh about the attack:

“There was this massive white shark bursting out of the water, real Jaws-like …

“It obviously gave one look at Leigh thinking he didn’t have enough meat, so he went at me.

“It was a flippin’ big thing.

“ I was still on my board and it came for me.

“I think the shark’s teeth got stuck in the surfboard. It then took another bite, but by then I let go of my board.

“It just bit the board again.”

Mellin, son of retired newspaper photographer Rob Mellin, said he started to panic and remembered screaming and shouting at Stolworthy: “Help me!”

“It all happened in … seconds.

“Afterwards we got onto our boards and paddled back.

“I was worried it would come back and strike again, but Leigh kept assuring me that it was nowhere in sight.”

They rushed to the hospital where Mellin was taken into the operating room for stitches.

Mellin, who has been surfing most of his life, said it was simply a case of being at the “wrong place at the wrong time”.

Stolworthy said he was also “lucky to be alive”.

“It was really close,” he recalled. “I was looking at it all the time and thinking: This can’t be for real!”

Mellin’s surfboard was bitten in two and teeth marks left on the two parts were evidence of the size of the shark.

The two surfers think the shark was about 10 feet long, and Mellin reckoned the dorsal fin was about 16 inches tall.

Buffalo City marine services chief Siani Tinley said it was likely the shark was a Great White but tests on the teeth marks on the surfboard and Mellin’s wound would confirm the species.

Tinley added that the clean and cold seawater was conducive to Great White feeding conditions.

Bonza Bay, Nahoon and Gonubie beach were closed with shark warnings on Saturday, but re-opened after 8am yesterday.

Both Mellin and Stolworthy told of seeing sharks before but they had never had a close encounter.

However, they agreed they will soon be back in the water – surfing, of course.

The Steven Spielberg movie Jaws is about a US resort being forced to close its beaches after a Great White attacks bathers.